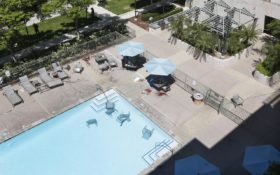 A Massachusetts family has captured a video of their toddler climbing what is supposed to be a gate stopping children from getting into a pool.

Keith Wyman says his family was in their backyard on Monday when his 2-year-old son Cody began to climb the gate blocking the ladder to their above-ground pool.

The Wymans grabbed Cody before he got into the pool, but not before capturing it on camera to show other parents how easily kids could climb over.

The video has since been viewed more than 16 million times on Facebook.

So I’m posting this video after I found my 2 year old Cody trying to climb our pool ladder when it was closed and locked I just got it with the new pool Tonya and I stress you to watch your kids around pools I will be buying a new type of ladder!! “Kid has some serious upper body strength “

The Wymans say the store where they bought the ladder and gate offered them a replacement, but all the other gates had a similar design.