Chicago bloodshed out of control! 52 shot in 3 days - The Horn News 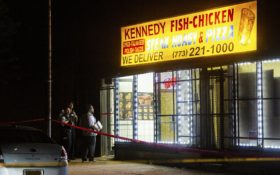 Chicago’s police chief on Monday decried a “despicable level of violence” during a weekend in which 52 people in the city were shot, eight of them fatally, and two people were stabbed to death.

Police in the Democrat-controlled city believe most of the shootings were gang-related, Superintendent Eddie Johnson said.

The shootings happened from 6 p.m. Friday until midnight Sunday on one of the warmest and sunniest weekends of the year in Chicago. The city often sees an increase in violence in warmer weather.

Johnson said the department increased the number of uniformed officers on the street — targeting areas where police expected gang members to retaliate for previous shootings. He said he believes that effort helped police seize 92 illegal firearms, nearly twice as many as the department seizes in a typical warm-weather weekend.

Police urged residents to come forward with any information that would help in the investigations of the shootings.

Chicago police say in the coming weeks more patrol officers will be deployed, including officers on bicycles and on foot, in some of the most popular destinations for tourists and residents in the nation’s third-largest city.

Johnson also reiterated his complaints about what he says are lax gun laws and court policies that he says turn the county jail into a revolving door for gun offenders.

“Until we stop giving them (gun offenders) the sense that they can do this with impunity, then we are going to continue to have these press conferences,” he said.