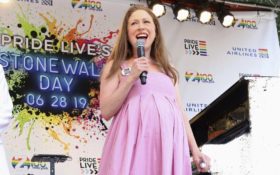 Chelsea Clinton has announced the birth of her third child. Jasper Clinton Mezvinsky was born Monday.

The former U.S. first daughter tweeted that she and husband Marc Mezvinsky “are overflowing with love and gratitude and can’t wait to introduce him to his big sister and brother.”

The 39-year-old Clinton and 41-year-old investment banker Mezvinsky have been married since 2010 and live in New York.