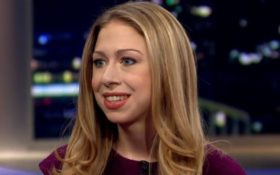 The mainstream media’s unhinged attack on President Donald Trump and his family has become so incredibly unhinged, even former first daughter Chelsea Clinton lashed out at their recent attacks.

“My darkhorse chief of staff pick: Barron Trump 1. Looks like Trump 2. Will not make Trump work 3. Cannot be tried as an adult,” Chait tweeted Monday.

The media’s attacks on the defenseless young Barron was too distasteful even for Chelsea Clinton.

Chelsea tweeted back a 23-word response pointing out that Barron was only a child — and was an unfair target, even for the deranged liberal media.

Please leave Barron Trump out of “jokes” & analyses. He’s a kid and private citizen and deserves to be left alone. Thank you. https://t.co/wDvfMo59vV

Of course, this isn’t the first time liberals have targeted the innocent 12-year-old boy as a way to get to the president.

And in an unthinkably low-brow attack, liberal celebrity Rosie O’Donnell celebrated the idea that Barron was scared by the image of his father — the president of the United States — was shown decapitated in a controversial photo.

Liberals have also joked that Barron is a mass murderer.

And have speculated he has autism because he was tired on election night.

The Trump Derangement Syndrome has become so unhinged in the media, even Chelsea Clinton can’t stand it anymore.