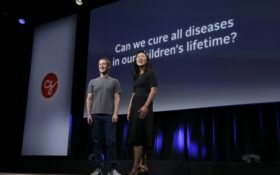 Fueled by a surging stock market and huge gifts from billionaires, charitable giving in the United States in 2017 topped the $400 billion mark for the first time, according to the latest comprehensive report on Americans’ giving patterns.

The Giving USA report, released Tuesday, said giving from individuals, estates, foundations and corporations reached an estimated $410 billion in 2017 — more than the gross domestic product of countries such as Israel and Ireland. The total was up 5.2 percent in current dollars (3 percent adjusted for inflation) from the estimate of $389.64 billion for 2016.

“Americans’ record-breaking charitable giving in 2017 demonstrates that even in divisive times our commitment to philanthropy is solid,” said Aggie Sweeney, chair of Giving USA Foundation, which publishes the annual report. It is researched and written by the Indiana University Lilly Family School of Philanthropy.

Giving increased to eight of the nine charitable sectors identified by Giving USA. The only decline was for areas related to international affairs.

Other sectors with increases of more than 6 percent included education, health, arts and culture, environment and animal welfare, and public-society benefit organizations — groups which work on such issues as voter education, civil rights, civil liberties and consumer rights.

Despite the record-setting total, Americans’ level of generosity is no higher than it was decades ago. For 2017, giving by individuals represented 2 percent of total disposable income — down from 2.4 percent in 2000 and the same as the rate in 1978. Similarly, total charitable donations have hovered around 2 percent of the gross domestic product for many years; for 2017, that figure was 2.1 percent.

Una Osili, a dean and economics professor at the Lilly Family School of Philanthropy, says the school’s research shows that the percentage of U.S. households making charitable donations has declined steadily in recent years, from about 67 percent in 2000 to 56.6 percent in 2015 — the latest year for which data is available.

She said giving rates for lower- and middle-class families had dropped significantly since the 2008 recession, while the giving rate for the wealthiest 20 percent of households was relatively steady.

Stacy Palmer, editor of the Chronicle of Philanthropy, said many fundraisers in the U.S. — while pleased with the recent increase in gifts — are unsure what lies ahead.

If trade wars break out, she said, that could weaken the economy to the point at which it deters some donors. She said fundraisers also worry that some middle-class donors may cut back on giving if changes in the new tax law no longer give them a deduction for their charitable donations.

Alluding to the surge of mega-gifts by the wealthy, Palmer added, “Some people feel they don’t need to give any more.”