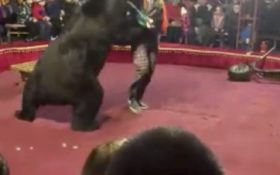 Officials have opened a criminal investigation after a circus bear attacked and injured its trainer during a performance in northern Russia.

Video of the Thursday attack in Olonets, a town 180 kilometers (110 miles) northeast of St. Petersburg, shows the bear pushing a wheelbarrow while walking on its hind legs, then attacking the trainer, biting him and forcing him to the floor. Another trainer hurries forward and kicks the bear repeatedly.

The online news site gazeta.ru cited a witness as saying the bear then ventured into the audience area before being subdued with an electric shocker.

There were no barriers between the circus ring and the audience. The Interfax news agency said the Investigative Committee has opened a criminal investigation on a charge of providing unsafe services.