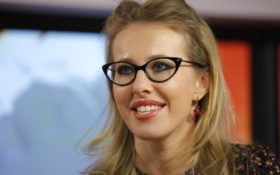 A presidential bid by a celebrity Russian TV host drew conflicting reaction from the country’s beleaguered opposition Thursday, with some accusing her of playing into the Kremlin’s hands and others welcoming her move.

Though President Vladimir Putin’s spokesman, Dmitry Peskov, denied that the Kremlin has encouraged Ksenia Sobchak to run, some opposition figures say her move would allow the government to counter voter apathy and at the same time sow discord in opposition ranks.

The 35-year old Sobchak announced her intention to run in the March 2018 election Wednesday, saying the country has grown tired of stagnation and needs change.

She is the daughter of Anatoly Sobchak, the reformist St. Petersburg mayor in the early 1990s. President Vladimir Putin once worked as her father’s deputy.

Sobchak, who joined anti-Kremlin protests in 2011-2012, said she had warned the president of her intention during a recent meeting, adding that Putin didn’t seem to like it.

Putin hasn’t yet said whether he would seek re-election, but he’s widely expected to run and is poised to convincingly see off the same set of lackluster veterans of past campaigns.

One of them, liberal leader Grigory Yavlinsky, warned that Sobchak would play a role similar to billionaire tycoon Mikhail Prokhorov, who challenged Putin in the 2012 election, casting himself as a representative of Russian liberal circles. Putin won with nearly 64 percent of the vote, while Prokhorov polled 8 percent.

“It’s the same trap, shall we walk into it again?” he tweeted.

Liberal politician Dmitry Gudkov sounded more positive, saying that if Sobchak runs a real campaign critical of the Kremlin, it could help encourage political competition and draw young voters to the polls.

When rumors about Sobchak’s presidential ambitions first circulated last month, Navalny, warned her on YouTube that she would only serve the Kremlin’s goals by joining the campaign.

“They need a cartoonish liberal candidate at a time when they don’t want to allow me to enter the race,” Navalny said.

Navalny has declared his intention to run, even though a criminal conviction that he calls politically motivated, bars him from running. The 41-year-old anti-corruption crusader has organized a grassroots campaign to support his bid and staged several waves of protests this year to raise pressure on the Kremlin to let him join the race.

Sobchak has rejected Navalny’s criticism, saying she would push for his registration and could even withdraw her candidacy in his favor if he’s allowed to run.

She cast herself as a “candidate against all,” trying to tap public resentment with the nation’s tightly-controlled and corrupt political system.

“It’s our peaceful and legitimate way to say: Enough, guys, we really had enough of you all!” she said in a YouTube video.

Pundits saw the slogan as a smart move to reach the apathetic voters tired of the same familiar faces on the nation’s political scene.

Sobchak, who first became known as a socialite and a fashion icon before she launched her successful TV career as a reality show host, has been frequently described as Russia’s version of Paris Hilton in the past.

Unlike her pushy TV persona, Sobchak sought to sound calm and compromising while declaring her bid.

And in contrast with Navalny who encouraged his supporters to take to the streets in defiance of official bans, Sobchak appealed to those who shun unsanctioned protests and want peaceful change.

“I’m against revolution,” she said in her manifesto.

“But I’m a good mediator and organizer. I’m a woman, and I don’t have that horrible masculine ego that always prevents politicians from reaching accord and makes force an option of choice for solving any problem.”