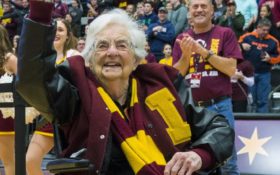 Sister Jean is celebrating her 99th birthday months after gaining national attention as chaplain of the Loyola-Chicago basketball team that reached the NCAA Final Four.

The university held a campus party with students and school staffers Tuesday for Sister Jean Dolores Schmidt. The Catholic nun became a celebrity last March for her fandom and for praying before each game for her Ramblers — and for their opponents.

Schmidt says her health is better some days than others as she’s been recovering since last year from a broken hip. She received a number 99 basketball jersey and a birthday cake frosted in the team’s maroon and gold colors.