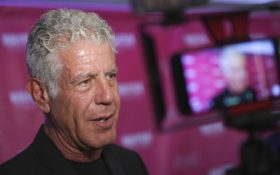 American TV celebrity and food writer Anthony Bourdain was found dead in his hotel room Friday in France while working on his CNN series on culinary traditions around the world. He was 61.

CNN confirmed the death, saying in a statement that Bourdain was found unresponsive Friday morning by friend and chef Eric Ripert in the French city of Strasbourg. It called his death a suicide.

Bourdain achieved celebrity status after the publication in 2000 of his best-selling book “Kitchen Confidential: Adventures in the Culinary Underbelly.” The book created a sensation by combining frank details of his life and career with behind-the-scenes observations on the culinary industry. It was a rare crossover — a book intended for professional cooks that had enormous mass appeal.

Bourdain went on to achieve widespread fame thanks to his CNN series “Parts Unknown” — and was filming an upcoming segment for the program when he was found dead, according to CNN.

“His love of great adventure, new friends, fine food and drink and the remarkable stories of the world made him a unique storyteller. His talents never ceased to amaze us and we will miss him very much,” CNN said.

Strasbourg police, emergency services and regional authorities did not immediately have information about the death and Bourdain’s assistant Laurie Woolever would not comment.

Chefs, fans and U.S. President Donald Trump were among those stunned and saddened by the news. “I want to extend to his family my heartfelt condolences,” Trump said.

Bourdain was twice divorced and has a daughter from his second marriage.

Bourdain’s “Parts Unknown” seemed like an odd choice for CNN when it started in 2013 — part travelogue, part history lesson, part love letter to exotic foods. Each trip was an adventure. There had been nothing quite like it on the staid news network, and it became an immediate hit.

He mixed a coarseness and whimsical sense of adventurousness, true to the rock ‘n’ roll music he loved.

“We are constantly asking ourselves, first and foremost, what is the most (messed) up thing we can do next week?” he said in a 2014 interview with The Associated Press.

The American chef, author and television personality was born in New York City and was raised in Leonia, New Jersey. He had written that his love of food began as a youth while on a family vacation in France, when he ate his first oyster.

Bourdain also mentioned his youth was punctuated by drug use and he dropped out of Vassar College after two years.

Working in restaurants led him to the Culinary Institute of America, where he graduated in 1978, and began working in kitchens in New York City. He became executive chef at Brasserie Les Halles in 1998.

In the preface to the latest edition “Kitchen Confidential,” Bourdain wrote of his shock at the success off his book, which he wrote by getting up at 5 a.m. in the morning to steal a couple of hours at the computer before appearing at the saute station for lunch.

“What I set out to do was write a book that my fellow cooks would find entertaining and true,” he said. “I wanted it to sound like me talking at say … ten o’clock on a Saturday night, after a busy dinner rush, me and a few cooks hanging around in the kitchen, knocking back a few beers and talking.”

Bourdain said he really had no idea that anyone outside the world of chefs would even pay attention to his comments.

“The new celebrity chef culture is a remarkable and admittedly annoying phenomenon. While it’s been nothing but good for business — and for me personally — many of us in the life can’t help snickering about it,” he wrote. “Of all the professions, after all, few people are less suited to be suddenly thrown into the public eye than chefs.”

If you’re thinking about suicide, are worried about a friend or loved one, or would like emotional support, the help is available 24/7 across the United States.