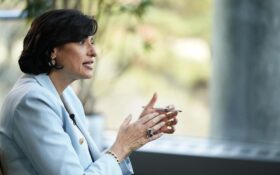 From the beginning of the COVID-19 pandemic, the top U.S. public health agency has been criticized as too slow to collect and act on new information.

Now, increasingly, the Centers for Disease Control and Prevention is also being criticized for moving too fast.

One year into Dr. Rochelle Walensky’s tenure as director, her bid to make the CDC more agile is being challenged by political pressures, vocal scientists and the changing virus itself. In its haste, some experts say, the agency has repeatedly stumbled — moving too quickly, before the science was clear, and then failing to communicate clearly with local health officials and the public.

“I think they are absolutely trying to be more nimble — and that’s a good thing. I don’t criticize that,” said Dr. Georges Benjamin, executive director of the American Public Health Association. “I criticize the fact that when you’re doing this quickly, in an evolving environment, you can’t just put it out there and think that people understand it.”

Walensky has said that she came to the CDC thinking about ways to speed data collection and reporting. She once told The Associated Press that she didn’t want the agency to spend months gathering data that gets published after it’s useful. “Like, no one will care,” she said.

Speaking to the AP last week, she said she was proud of what the agency had accomplished in the past year. Her examples included a torrent of CDC scientific reports, rapid identification of concerning vaccine side effects and quick research into new variants.

Among her particular points of pride: Last spring, the CDC was quick to investigate and report on rare but concerning side effects in some vaccine recipients, including an unusual blood clot in young women who had received Johnson & Johnson shots. The identification of about 15 cases — out of more than 8 million people who had gotten the vaccine — led the government to pause the dispensing of J&J shots for 11 days.

“Everyone has said that during a pandemic, CDC has to move faster,” she said. “I think we really did that.”

Her efforts, though, have sometimes gone awry:

— The agency’s decision late last month to shorten isolation and quarantine caught many by surprise. Public confusion included questions such as whether the guidance applied to children and why people didn’t need to test negative before going back to their jobs.

— The CDC briefly overstated the omicron variant’s penetration in the U.S. In mid-December, the agency estimated 73% of the previous week’s coronavirus infections were due to omicron. A week later, the CDC shaved it to 23%, based on additional data. (The CDC turned out to be a week early: Omicron now reigns.)

Walensky has many defenders. They say that in most cases, core decisions made sense at the time they were made. The real problem, they say, was with how they were rolled out and communicated.

‘WE NEED TO DO AN OVERHAUL’

The CDC has long been considered the crown jewel of U.S. public health, with great minds working to investigate illness and coordinate national efforts to prevent it. But it also has been repeatedly criticized as timid and slow in a crisis.

Much of the problem has been lack of funding and governmental authority, said Shelley Hearne, a John Hopkins University professor of health policy and management. She noted, for example, that the CDC can’t require doctors or states to report disease case counts or other vital information.

Walensky is not going to change that, Hearne said.

“If the pandemic has shown anything, it’s that we need to do an overhaul of how we protect our health,” she said.

Compounding the problem is pressure on the CDC from both Republican and Democratic administrations to speak in harmony with the White House. That’s not new, but there is now more second-guessing by other scientists and public health experts on social media.

And then there’s the general fracturing of the nation.

Some politicians and others have repeatedly undermined the CDC’s message, said Benjamin, of the American Public Health Association. CDC directors “didn’t have this kind of mischief going on in the past,” he said.

Early in 2020, the CDC was slow to send out test kits to help state labs identify the earliest coronavirus infections. The agency’s kits had a design flaw and were contaminated.

CDC officials were initially focused on the risk of infections spreading from China and were slow to understand how much coronavirus was coming from Europe.

The agency also was criticized for being too slow to recommend people wear masks, to recognize that the virus can spread through the air and to ramp up systematic testing to detect new variants.

In 2020, the Trump administration was accused of political interference for working to control CDC messaging that might contradict the White House’s portrayal of how the crisis was unfolding.

This week marks Walensky’s anniversary as CDC director, and the agency is still criticized as slow at times.

For example, the CDC last week updated its website to acknowledge N95 masks are more protective than other types and the better choice for most people — something that has long been obvious to scientists.

“So why has its guidance come out late time & time again?” Lawrence Gostin, a Georgetown University public health law expert, asked on Twitter.

On Wednesday, Biden defended the CDC, saying: “The messages, to the extent they’ve been confusing — it’s because the scientists, they’re learning more.”

Public health experts note the fast-changing pandemic has forced the CDC to reverse decisions that made sense at one point but later became problematic.

One example: For much of the pandemic, the CDC had advised Americans to wear masks when near others. But last spring, Walensky changed the guidance, saying fully vaccinated people could stop covering up in most settings.

Walensky said the decision was driven by rising vaccination numbers and declines in COVID-19 cases, hospitalizations and deaths. Her call was characterized as a sensible incentive to get more people vaccinated.

“If we had not followed the science (at the time), and said masks need to stay on, I think we would have lost credibility,” she said last week.

Still, the change surprised senior administration officials and some medical experts, who called it premature.

Within weeks, the delta variant triggered a new virus wave. A Massachusetts outbreak in July demonstrated the variant’s ability to spread among vaccinated people, so Walensky recommended the vaccinated return to wearing masks in places where delta was fueling infections.

“We saw data on a Friday from Barnstable County,” she said. “We had new guidance out on (the following) Tuesday.”

Even public health leaders who voice strong support for Walensky have lamented how some CDC recommendations are communicated — without background briefings or documents that fully detail the scientific evidence.

In some instances, local health officials have learned about guidance changes through news reports, and then struggled to incorporate them, said Adriane Casalotti of the National Association of County and City Health Officials.

The CDC has become cautious about briefing others beforehand because such information has repeatedly been leaked to the media, said one agency official, who was not authorized to discuss the matter and spoke to the AP on condition of anonymity.

But that has created another kind of problem.

Last month, the agency cut the recommended isolation period for Americans with the coronavirus from 10 to five days, provided they have no symptoms. With no warning of the change, states scrambled for additional detail.

“We had a one-page media release” and a lot of unanswered questions, said Dr. Natasha Bagdasarian, Michigan’s chief medical executive, explaining why the state delayed adopting the CDC recommendations.

Walensky acknowledged the recommendations were rushed, but insisted it was for good reason.

The agency had already decided the change was warranted, given research showing infectiousness was reduced after five days, she said. But Walensky felt she had to react to mounting reports that health care facilities and other businesses were struggling to maintain staffing amid omicron’s surge.

With forecasts that infections were going to explode, “we needed to act quickly, given what we were about to face,” she said.

“No one is used to watching a learning curve like this,” she said. “This isn’t normal.”