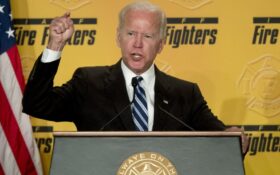 Early in the campaign, Democratic presidential nominee Joe Biden was asked on ABC News whether he had any knowledge of the prosecution of former National Security Advisor Mike Flynn.

Biden denied having any knowledge of the now-discredited smear campaign against Flynn.

A newly released report from a veteran journalist at CBS News suggests that he lied — and now Biden is facing calls to be investigated.

“I knew nothing about those moves to investigate Michael Flynn,” Biden said months ago.

.@JoeBiden months ago: “I knew nothing about those moves to investigate Michael Flynn.”

“appear legit.” According to Strzok’s notes, it appears that Vice President Biden personally raised the idea of the Logan Act. " @CBSNews pic.twitter.com/7br1u48Ynd

The uncovered notes show Biden was at the early January meeting where Obama officials discussed Flynn. In fact, the notes alleged that Biden suggested Flynn be investigated for the Logan Act.

“’Strzok’s notes believed to be of January 4, 2017,'” she wrote on Twitter, quoting a Department of Justice review “‘reveal that former President Obama, James Comey, Sally Yates, Joe Biden, and apparently Susan Rice discussed the transcripts of Flynn’s calls and how to proceed against him.”

“According to Strzok’s notes, it appears that Vice President Biden personally raised the idea of the Logan Act.”

Critics say the mainstream media has largely ignored the scandal.

Where is the Mainstream Media on this?

As civil unrest and a global pandemic continue to disturb the nation, the media has made the bombshell development in the Flynn saga very quiet.

A divided federal appeals court on Wednesday ordered the dismissal of the criminal case against Flynn, turning back efforts by a judge to scrutinize the Justice Department’s extraordinary decision to drop the prosecution.

The U.S. Circuit Court of Appeals for the District of Columbia said in a 2-1 ruling that the Justice Department’s move to abandon the case against Flynn settles the matter, even though Flynn pleaded guilty as part of special counsel Robert Mueller’s Russia investigation to lying to the FBI.

The ruling, a significant win for both Flynn and the Justice Department, appears to cut short what could have been a protracted legal fight over the basis for the government’s dismissal of the case.

The House Judiciary Committee held a hearing Wednesday centered on another unusual move by Barr to overrule his own prosecutors and ask for less prison time for another Trump associate, Roger Stone. Barr has accepted an invitation to testify before the panel on July 28, a spokeswoman said Wednesday, and he will almost certainly be pressed about the Flynn case.

Later, at the White House, Trump told reporters he was happy for Flynn.

“He was treated horribly by a group of very bad people,” Trump said. “What happened to Gen. Flynn should never happen in our country.”

Flynn called into conservative commentator Rush Limbaugh’s radio show and said the ruling was a good development for him and his family. But he also called it “great boost of confidence for the American people in our justice system because that’s what this really comes down to — is whether or not our justice system is going to have the confidence of the American people.”

U.S. District Judge Emmet Sullivan had declined to immediately dismiss the case, seeking instead to evaluate on his own the department’s request. He appointed a retired federal judge to argue against the Justice Department’s position and to consider whether Flynn could be held in criminal contempt for perjury. He had set a July 16 hearing to formally hear the request to dismiss the case.

Judge Neomi Rao, a Trump nominee who was joined by Judge Karen LeCraft Henderson, wrote that Sullivan had overstepped his bounds by second-guessing the Justice Department’s decision. This case, she said, “is not the unusual case where a more searching inquiry is justified.”

She called Sullivan’s scrutiny of the government’s request an “irregular and searching” step that could force the government to have to publicly justify its decision in this case and others.

“Our precedents emphatically leave prosecutorial charging decisions to the Executive Branch and hold that a court may scrutinize a motion to dismiss only on the extraordinary showing of harassment of the defendant or malfeasance such as bribery — neither of which is manifest in the record before the district court,” she wrote.

Some critics of the Justice Department’s dismissal urged the full appeals court to take up the case and reverse the decision of the three-judge panel, as it is empowered to do.

In a dissent, Judge Robert Wilkins said it appeared to be the first time his court had compelled a lower court judge to rule in a particular way without giving the judge a “reasonable opportunity to issue its own ruling.”

“It is a great irony that, in finding the District Court to have exceeded its jurisdiction, this Court so grievously oversteps its own,” wrote Wilkins, an appointee of former President Barack Obama.