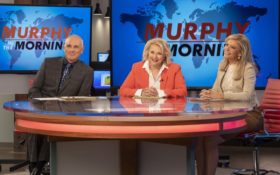 Last season’s short-lived “Roseanne” revival blew an air kiss to President Donald Trump in its debut episode before it reverted to finding laughs in family and working-class woes, not politics. Expect “Murphy Brown,” another reborn 20th-century sitcom, to be consistently faithful to its own roots.

Washington tumult, social issues and the role of journalism will be central when the sitcom starring Candice Bergen as a tough TV reporter returns 9:30 p.m. EDT Thursday on CBS, said creator and executive producer Diane English.

The series is “here to make some noise,” English said in an interview, sketching out a few of topics to be featured in the season’s 13 episodes: “We’re doing an immigration episode, we’re doing a midterm-elections episode. We’re doing a Me Too episode,” she said.

The debut half-hour is “so ambitious and so fearless,” Bergen told a TV critics’ news conference. “During the taping, I turned to Joe (Regalbuto, her co-star) at one point and I said, ‘This show has no fear of anyone.’”

In the revival, former network reporter Murphy is now on cable with the frothily titled “Murphy in the Morning.” Along for the ride at the fictitious CNC news channel are her old “FYI” news magazine colleagues, including Regalbuto’s Frank Fontana, Faith Ford’s Corky Sherwood and Grant Shaud’s Miles Silverberg.

Murphy and her colleagues “are trying to present the facts in a straight down the middle way,” English said. “Their show is issue-oriented and facts, with no personal opinion.”

Jake McDorman (“Shameless”) joins the cast as Murphy’s son, Avery, a reporter at the competing and conservative Wolf — ahem — news channel. He’s liberal, but his work outside of the Washington beltway “bubble” has given him an appreciation for different views, English said.

“He has paid attention to the people who feel that they were passed over and he’s their voice, to some degree. The way he creates his own show gives a voice to people that are the forgotten and the people who the elites, in quotes, call ‘the flyovers,’” she said.

An advantage the new series has over the 1988-98 original comes courtesy of technology, with digital recording allowing references to real-world news to be updated close to air, an impossibility in the old era of film.

The original “Murphy Brown” wasn’t shy about intersecting with reality, most notably after the 1992 presidential campaign in which Dan Quayle, vice president to George H.W. Bush, lambasted the unmarried Murphy’s pregnancy as a mockery of fatherhood and a Hollywood raspberry to American morality.

The top-rated, Emmy-winning series fired back in an ongoing tiff that generated headlines and fierce debate — this before the advent of social media and its incendiary effect on anything and everything, and before public distrust of journalism became more entrenched.

English, herself a sparing user of online platforms (she enjoys Instagram and finds it largely friendly, but has harsh words for Facebook) said she’s prepared for backlash.

“I am very aware of the fact that we’re in a different world. But as in the old days, we never really censored ourselves in terms of the kinds of stories we would tell and the positions that we would have characters take,” she said. “So, yeah, we’re in a very divisive climate right now, but we’re still going to be the show that we always were.”

That means topical, funny and, importantly, “no vitriol in the scripts. That’s something I want to keep my antenna up about. And, hopefully, through humor shed some light on some things that any reasonable person, whether you’re a Republican or a Democrat or an independent, can find interesting,” she said.

The Louisiana-born Sherwood said she reminds her politically “middle-ish” family back home that the joke is frequently on the show’s imperfect characters.

“We are all flawed as human beings … we all make fun of ourselves, and so the whole point of it is to make people laugh at whatever is going on right now,” Sherwood said.

English, with credits including a 2008 version of Clare Booth Luce’s play (and 1939 film) “The Women,” initially hesitated when Warner Bros. studio executives approach her about bringing it back amid other successful revivals — which included “Roseanne,” until star Roseanne Barr’s racist tweet killed it. (ABC is rolling the dice this season on its spinoff, “The Conners,” minus Barr.)

“When you’ve been on the air for 10 years and people call you an iconic series, do you want to go back and take that risk that you might ruin it or it wouldn’t be as good as it was at one time?” English said.

Watching “Will & Grace” manage a successful comeback piqued her interest, but it was the aftermath of the 2016 election that made the difference.

“I started really thinking seriously about it as things in our country got worse and worse,” she said. “And I thought, ‘You know, all these shows are coming back but ours is the one that has the real reason to come back.’ We are about the press. We always were a politically and culturally relevant show.”

The Associated Press contributes to this article.