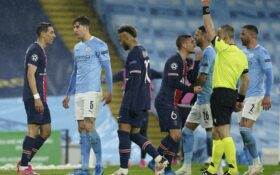 Di Maria was sent off for kicking Fernandinho, and as the Argentina international walked off the field, Beglin said “it’s that Latino temperament.” He made an on-air apology Tuesday and later expressed remorse on social media.

“I apologise for my culturally insensitive remarks during the Champions League tie between Manchester City and Paris Saint-Germain,” he wrote on Twitter. “I wrongly used a racial stereotype. This was inappropriate and unacceptable.

“Words have a strong impact,” his post continued, “and I fully understand the severity of what I said when Angel Di Maria was sent off. I will learn from this and be better moving forward. Jim.”

The 57-year-old Irishman played as a defender for Liverpool and Leeds and was part of Ireland’s national team in the 1980s.

City beat PSG 4-1 on aggregate and advanced to its first Champions League final.