Caught on camera: The fix was in for Biden - The Horn News 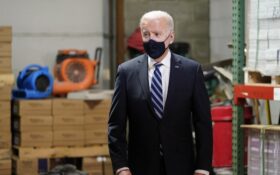 A Facebook executive has admitted on video: The social media giant fixed the election for Joe Biden.

Video has surfaced of Facebook Global Planning Lead Benny Thomas agreeing that “we won” the 2020 election because of one Facebook action: its voter registration drive.

Everyone who logged onto the platform for months got bombarded with messages to vote, but the website also conducted a massive campaign to register four million new voters.

Benny Thomas said “one of the things I worked on, which made me happy, was a voter registration drive,” which ultimately registered 4.5 million new voters.

“We made a big difference,” Thomas said.

The Project Veritas journalist broke the code of silence and said, “Yeah I’m pretty sure we (Biden) won that way.”

In the video, Thomas laughs—and then gives away the game.

And Thomas also admitted Facebook knows who not to turn out.

Thomas said if you can find someone who “lives in an all white town” and has a certain “religious preference,” then “you can triangulate three or four data points and say, ‘She’s likely to be racist.’”

President Donald Trump’s supporters have long questioned how Joe Biden won the 2020 election—and particularly how he improved his performance in a handful of cities in pivotal swing states.

Now Thomas admits that the whole point of the voter drive was to use the vast amounts of personally identifiable data that Big Tech has at its disposal—by spying on your social media use—and then weaponize it to register new, likely Democratic voters.

The damning admission comes months after the Trump campaign sounded the alarm bells that Facebook was trying to rig the election for Joe Biden and Kamala Harris.

“With knowledge of every user’s political ideology, Facebook is officially in the business of political advocacy and their efforts to silence conservative voices should be seen as nothing less than an attempt to ultimately benefit Biden and the Democrat Party,” said Trump campaign spokesperson Samantha Zager last July.

Facebook denied the charge at the time. Facebook employee Emily Dalton Smith called the platform’s voter registration efforts nonpartisan. The only information it would access is age and location, to make sure it directed potential voters to the right office to get registered for the 2020 vote.

Now that the election is over, they feel they can let their bias show—if you haven’t figured it out yet.

NBC News asked people who said 2020 was “the first year you have ever voted” who they supported—and they broke nearly two to one for Joe Biden.

First-time voters backed Biden-Harris over Trump-Pence by 64% to 32%, according to exit polls conducted on election night 2020 by NBC News.

Facebook may have also helped turn out young voters, who tend to be overwhelmingly liberal, according to one of the nation’s most respected think tanks, the Brookings Institute.

The election results definitely freed up Facebook. As soon as Biden got into office, social media dropped the facade of objectivity and even-handedness.

And its fact-checkers have added “context” to everything from election claims to posts from the satire website The Babylon Bee.

Comments like Thomas’ show that Facebook has a baked-in bias against a huge portion of its users: small town, God-fearing Americans.

Donald Trump may have the last laugh; his team has confirmed he’s planning on launching a new social media platform for conservatives and Trump supporters.