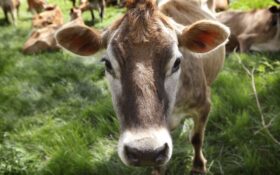 A Montana man who was charged in a cattle rustling scheme has been sentenced to 30 months in prison after pleading guilty to wire fraud and to selling cattle that were collateral for loans, the U.S. Attorney’s Office in Montana said.

Joshua James Chappa of Bozeman was sentenced last Friday by U.S. District Judge Dana Christensen in Missoula. Christensen ordered Chappa to pay nearly $451,000 in restitution at a rate of $2,000 per month. It would take nearly 19 years to make full restitution.

When the owners of the Hayes Ranch were out of the U.S., Chappa began dealing in cattle, including stealing cattle from his employer and selling them as if they were his own, prosecutors said. He was ordered to pay the ranch $241,000 in restitution.

Chappa also borrowed money from Northwest Farm Credit Services, pledging his cattle as collateral. However, he sold the cattle without repaying the loans. He was ordered to pay Northwest nearly $205,000.

Christensen also ordered Chappa to pay $5,000 to Willers Mitten Brand of Norfolk, Nebraska, after partnering with the company in cattle ventures and failing to make payments to the company when he sold the cattle.

Ten other charges were dismissed as part of the plea agreement, prosecutors said.