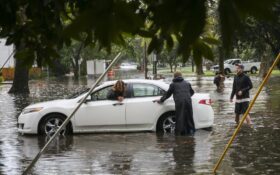 The sun was shining when Kim Williams hopped in her Honda Odyssey to visit a friend at a nursing home. But an unexpected downpour on the drive back left her trapped in a maze of flooded streets.

Williams made turn after turn to avoid rising waters in a century-old neighborhood in Norfolk before shutting off her minivan.

“I knew that I would kill the car if I kept driving,” Williams said of the storm from a few years ago. “I called the tow company and they said, ‘We’ll get to it when we can. We’ve got a very long list.’”

The increasing threat of sea-level rise on Virginia’s coast means that an afternoon rainstorm can strand drivers for hours, delay parents from picking up children and damage cars beyond repair – all without a tropical storm on the radar.

The city of Norfolk is trying to do something about that: Officials have partnered with the tech firm FloodMapp and the Waze traffic app to warn residents of flooded roadways in real time. The project is being launched at a time when cities around the world are trying to adapt to climate change. And it’s an example of how new technology will likely play an increasing role.

The pilot program in Norfolk went live this month after two years of development. FloodMapp CEO Juliette Murphy said the firm’s modeling has proved to be “incredibly accurate” along the streets of this low-lying city on the Chesapeake Bay.

FloodMapp feeds data from rain forecasts, tide gauges and Norfolk’s terrain into an algorithm. Drivers are warned on Waze when at least 6 inches (15 centimeters) of water has likely pooled on a specific roadway. New flood information is updated every 15 minutes.

Kyle Spencer, who is helping Norfolk adapt to sea-level rise as its acting chief resilience officer, said a single storm can strand hundreds of vehicles. The plan is for Waze to eventually reroute drivers when a road floods with 12 inches (30 centimeters) of water.

The app’s accuracy will improve, Spencer said, because drivers will validate Waze’s warnings.

“It’s kind of like a living thing,” Spencer said. “The feedback loop can help make these models even better.”

Norfolk, a city of nearly 250,000 people, is an ideal testing ground. It’s more threatened than any other place on the Atlantic Coast by the combination of sinking land and rising seas, said Molly Mitchell, a Virginia Institute of Marine Science professor.

Water levels have risen by about 1.5 feet (.5 meters) since 1928. They’re projected to rise by close to another 1.5 feet by 2050 — or more depending on the Earth’s rising temperatures.

The Chesapeake Bay and the Elizabeth River form a crescent of water around three sides of the city, while other tributaries flow into its interior. During high tides, rains can overwhelm sewers and have nowhere to go but low-lying streets.

Flooding affects truck traffic heading to and from port terminals. And it impedes the ability of U.S. Navy sailors to quickly reach the world’s largest naval base, where piers are lined with aircraft carriers.

Marc Rabinowitz, a now-retired psychoanalyst, lost his Saab in a nor’easter several years ago. Floodwaters blocked his commute to work. He turned down a one-way street the wrong way because it looked clear.

“I got about halfway down, and water just starts filling up the car,” he said. “The car clogs. It stops running. Luckily, a colleague who was walking to work starts pushing me off to the side.”

Drivers also face unpredictable “rain bombs,” which can dump an inch of water in 30 minutes on an isolated area.

Marc Vigeant, a project manager for a marine construction company, was caught in one in 2020 when he left work.

Water pooled around him. He searched Google Earth for higher elevation and quickly drove his Toyota Corolla to a nearby parking lot.

“By that time, I was trapped in there,” Vigeant said.

“There have been times when I’ve thought to visit my mother, but it’s raining,” she said. “I drive one or two blocks and the water is high. And I forgo the trip.”

The project in Norfolk shows how new technologies can help people adapt to climate change but it fails to address the root causes, said Jesse Goldstein, a Virginia Commonwealth University sociology professor who studies the green economy.

“It’s allowing the fossil-fuel-burning economy to try and hold on a little bit longer,” Goldstein said.

“The economy that makes Waze possible is creating the flooding. And now Waze is helping us adapt,” Goldstein continued. “I don’t say that to be holier than thou. It’s just that we’ve got a deeply entrenched problem.”

More than half of all flood-related deaths in the U.S. in recent years happened in motor vehicles, said Andrew Stober, head of public partnerships for Waze, which has 140 million monthly users worldwide.

“Making sure that people can steer clear of flooding is saving lives,” Stober said.

FloodMapp was recruited to Norfolk by city officials and RISE Resilience Innovations, a Virginia-based nonprofit that finances climate-related technologies with federal and state dollars.

RISE gave FloodMapp a $300,000 grant following a contest that challenged companies to tackle the problem of navigating flooded roads.

“A lot of people say, ‘Well, why hasn’t this been done before?’ But it’s not a simple task, it’s not easy,” said Paul Robinson, the executive director of RISE.

Robinson said Norfolk is a fitting place for FloodMapp to work out any problems before entering “big markets like Philadelphia and Boston and New York.”

FloodMapp, which was founded in Australia, said it’s already expanding in the U.S. and plans to sell its services to transit agencies, delivery companies and utilities.

“We’re seeing floods become more frequent and more severe,” said Murphy, the firm’s CEO. “Unfortunately, this is only getting worse.”