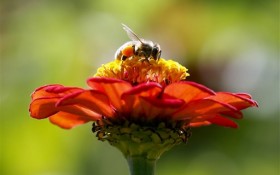 Traffic was disrupted in a Washington state city when boxes holding thousands of bees fell off a truck.

The Moscow-Pullman Daily News reports the boxes fell off a Washington State University truck on Thursday morning in Pullman.

Pullman police took a call on the accident shortly after 7:30 a.m.

Police Chief Gary Jenkins says an officer at the scene described thousands of bees buzzing through the air while university employees put on protective gear and picked up the boxes.

A road was closed until just before 10 a.m.

The WSU Department of Entomology has a breeding program and research lab to study and protect bee populations.