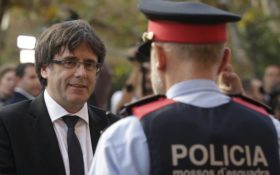 Catalonia’s regional leader prepared to address parliament Tuesday in a highly anticipated session that could spell the birth of a new republic, marking a critical point in a decade-long standoff between Catalan separatists and Spain’s central authorities.

Security was tight in Barcelona and police cordoned off a park surrounding the legislative building, where Catalan President Carles Puigdemont is expected to walk a fine line when he addresses regional lawmakers.

The speech, initially scheduled to begin at 6 p.m. (1600GMT), was delayed by an hour following a request by Puigdemont because a parliamentary group needed to hold a meeting on opposition lawmakers’ request to cancel the session.

The speech will need to appease the most radical separatist-minded supporters of his ruling coalition — but Puigdemont could shut down any possibility of negotiating with Spain if he adopts a hard line.

The Catalan leader hasn’t revealed the precise message he will deliver in the address, but separatist lawmakers and activists have said they won’t be satisfied with anything short of an independence declaration.

In Brussels, European Council President Donald Tusk pleaded directly with the Catalan leadership to choose dialogue rather than a divisive call for independence.

“I ask you to respect in your intentions the constitutional order and not to announce a decision that would make such a dialogue impossible,” he said.

A full declaration of secession — or an outright proclamation of a new Catalan Republic — would be met with fierce opposition by central Spanish authorities, who could take the unprecedented step of suspending the self-government of Catalonia and taking over some or all powers in the region.

Puigdemont himself could end up in prison.

Some 2.3 million Catalans — or 43 percent of the electorate in the north-eastern region — turned out to vote in the Oct. 1 independence referendum, which the Spanish government said was illegal. Regional authorities say 90 percent who voted were in favor and declared the results of the vote valid.

Spanish Prime Minister Mariano Rajoy’s government had repeatedly refused to grant Catalonia permission to hold a referendum on grounds that it was unconstitutional since it would only poll a portion of Spain’s 46 million residents.

Catalonia’s separatists camp has grown in recent years, strengthened by Spain’s recent economic crisis and by Madrid’s rejection of attempts to increase self-rule in the region.

On Tuesday, about two dozen tractors flying secessionist flags paraded near parliament and a small but growing group of separatists gathered in the promenade next to Barcelona’s Arc de Triomf, where the movement’s main grassroots group has called for a rally.

The political deadlock has been compared in Spain to a “train collision” and has plunged the country into its deepest political crisis in more than four decades, since democratic rule was restored following the dictatorship of Gen. Francisco Franco.

In the streets of Barcelona, expectations were divided between those who want to see the birth of a new nation and others opposed to the idea. Some feared a drastic backlash from the Spanish central authorities.

“I am thrilled,” said Maria Redon, a 51-year-old office worker. “I’ve been waiting for this all my life. We have fought a lot to see an independent Catalonia.”

But Carlos Gabriel, a 36-year-old waiter, said that is “impossible.”

“He won’t do it. By doing so he would be diving into an empty pool,” he said referring to Puigdemont’s parliamentary address. “These people know it’s just a dream. Something very complicated. Something that will carry many negative consequences for all of us.”

In Catalonia and elsewhere in Spain, people were reading between the lines of politicians’ statements to try to figure out what’s next.

Analysts expected a declaration that would be solid in its wording but symbolic in terms of immediate effects, with Puigdemont perhaps laying out a roadmap for achieving full secession.

Even if Puigdemont declares independence, that won’t immediately lead to the creation of a new state because the Catalan government will need to figure out how to wrest control of its sovereignty from a Spanish government that has the law, and international support, on its side, said Joan Barcelo, a researcher of political conflicts at Washington University of St. Louis.

He said any declaration must be viewed through the lens of “the Catalan government’s long-term strategy of provoking an extraordinary and even clumsy reaction from central authorities” to build support.

The Catalan parliament’s governing board acknowledged Tuesday morning it had received the results of last week’s disputed independence referendum. But a parliamentary official who spoke on condition of anonymity said the board refrained from putting the results through normal parliamentary procedures to avoid any legal problems, because the referendum and its legal framework have been suspended by the national Constitutional Court.

Hundreds of thousands have turned out for street protests in Barcelona and other towns in the past month to back Catalan independence and protest against police violence during the vote. Those committed to national unity have also staged separate, large-scale rallies.

The tension has already affected the economy, with dozens of companies relocating their corporate addresses to remain under Spanish and European laws if Catalonia manages to secede. The moves of the firms’ bases have not so far affected jobs or investments, but they don’t send a message of confidence in the Puigdemont government.

“This is not about independence, yes or no. This is about a rebellion against the rule of law,” de Guindos told reporters in Luxembourg, where he was meeting with European Union ministers. “And the rule of law is the foundation of coexistence, not only in Spain but in Europe.”