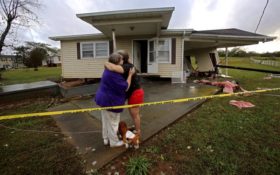 The Carolinas are cleaning up after being slammed by severe thunderstorms with damaging winds and flooding and possible tornadoes that flipped tractor-trailers and small planes, broke storefront windows and pushed at least one house off its foundation. At least 98,000 homes and businesses lost power, forcing some schools to close Tuesday.

The National Weather Service reported that many trees and power lines were brought down Monday afternoon and evening across western North Carolina and South Carolina. Small planes were flipped over and their hangars crumpled at the Hickory Regional Airport. Drivers navigated flooded streets in Asheville and Boone, and possible tornados left trails of damage. Fire departments rescued drivers from flooded roads in Pickens County in western South Carolina.

As many as nine tornadoes were reported in the western Carolinas and the weather service planned to send crews Tuesday to confirm whether the damage was caused by tornadoes or high winds. The worst problems appeared to be in Spartanburg, South Carolina and Hickory, North Carolina.

“You could hear it howl through downtown,” Michael Parsons, whose Michael’s Jewelers store in North Wilkesboro was damaged when a nearby roof blew off, told WXII News 12, the local NBC affiliate.

JoAnn Perez arrived home shortly after the storms passed to see her home pushed off its concrete slab, with her dogs and cat inside it, in Shelby, North Carolina.

No deaths have been reported from the storms. Spartanburg Regional Hospital said it had treated eight people with minor injuries.

Duke Energy said by late Tuesday morning, its crews were working to restore electricity to more than 78,000 customers. About 66,000 were without service in North Carolina and another 12,000 were powerless in South Carolina.