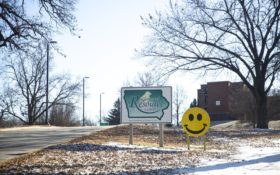 Two doctors and other former employees of an Iowa care center for people with intellectual disabilities have filed a federal civil rights lawsuit against a state agency and several officials, alleging a conspiracy to silence complaints about sexual arousal research that included using pornographic material that they claim exploited fragile and dependent residents.

The allegations center on Jerry Rea, the former superintendent of the Glenwood Resource Center, a researcher hired in 2017 by the state of Iowa from Kansas. Lawsuit plaintiffs claim Rea was determined to turn the state-owned facility into a research center through medical experimentation, including “sexual arousal research” on extremely fragile and dependent residents.

The lawsuit was filed Monday in U.S. District Court by Dr. John Heffron and Dr. Michael Langenfeld, two former Glenwood doctors, and other former employees, including an assistant superintendent, a guardian for two patients, the director of quality management and a nurse practitioner.

It names as defendants former DHS Director Jerry Foxhoven, who resigned in June 2019 at the request of Gov. Kim Reynolds; Richard Shults, director of the Iowa Department of Human Services Division of Mental Health and Disability Service, who retired last month; Rea who was fired in December; and Mohammad Rehman, Glenwood medical director, who remains on the job.

The doctors and other plaintiffs allege violations of federal civil rights and whistleblower laws, wrongful termination and interference with a doctor-patient relationship.

The lawsuit says the case is the result of a conspiracy to silence, punish and retaliate against long-time medical and administrative professionals for expressing their concerns to management of the Glenwood Resource Center, their state superiors and other officials regarding violations of an array of state and federal laws and policies designed to protect severely disabled and vulnerable patients.

A spokesman for Gov. Kim Reynolds said she wouldn’t comment on the lawsuit.

DHS spokesman Matt Highland said the department does not comment on pending litigation.

“DHS is committed to ensuring the safety and well-being of those we serve, and our employees. We continue to take all necessary action to address all allegations,” he said in an email response.

The lawsuit claims problems began when Rea, a child psychologist from Kansas, was hired to oversee Glenwood.

He had been superintendent of a Kansas facility and was an adjunct assistant research professor at the University of Kansas. Among his research interests in Kansas were topics related to deviant sexual behavior and arousal, including with individuals with intellectual disabilities. In 1998, before joining Glenwood, he received a patent for a device used to measure sexual arousal.

The lawsuit claims he was hired, in part, due to his personal relationship with Shults, to whom Rea directly reported.

The plaintiffs allege he made significant changes in the management to cut costs and guide the facility toward becoming research focused, including sexual arousal research.

The facility, which cares for about 200 patients, had been investigated by the U.S. Department of Justice in 2004 and was required under a settlement with the federal government to provide a safe and humane environment, not to use prone restraints and to limit the use of any physical restraints. The facility also was required to obtain informed consent from guardians for residents, to make use of interdisciplinary treatment and care teams and to prepare written policies and procedures to ensure the use of recognized standards of medical care. The facility came into compliance in April 2010.

The lawsuit alleges Rea’s goal was to transform Glenwood “from a facility focused on patient care, into a research facility to further Defendant Rea’s longstanding interest in clinical research involving sexual arousal and sexual deviancy, among other things.” The suit claims patients were used as “guinea pigs’ in experiments.

The lawsuit does not specify how many residents were involved.

Rea and his team bought devices and tools including stock photos, which included pornographic images and a dedicated computer, software program and a joystick for the sole purpose of the research, the lawsuit alleges.

Kelly Brodie, the former assistant superintendent of treatment support and one of the plaintiffs, objected but was overruled by Shults, according to lawsuit documents.

The lawsuit also alleges consent from the patient guardians was not obtained prior to beginning the experiments, and Glenwood officials were forced to later scramble to get consent after receiving notice of a new Department of Justice investigation last year.

Preparing the patients for the sexual arousal experiments included adjustments to their medication, which alarmed the doctors.

“When a non-physician unilaterally adjusts this medication mix, without understanding these related medications, the risk of patient harm is significant,” according to the lawsuit plaintiffs.

They claim interference caused harm to patients, including causing seizures and behavior that was later used to justify increased use of physical restraints in violation of the earlier consent decree.

The doctors said after they were forced out, the quality of care declined and the rate of deaths and other adverse events for patients increased significantly.

Federal investigators were expected to visit the facility this week as part of the investigation.