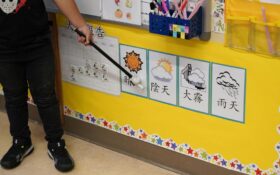 Three decades ago, finding opportunities to learn Cantonese in San Francisco wasn’t hard. But today in the city that’s drawn Cantonese speakers from South China for over 150 years, there’s fear that political and social upheaval are diminishing a language that is a cultural touchstone.

The Chinese government’s push for wider use of Mandarin— already the national language, spoken by 1 billion people — along with the country’s changing migration patterns have contributed to an undeniable shift away from Cantonese. It’s a change that has reverberated from East to West.

From the United States to the United Kingdom and beyond, there’s worry among native and second-generation Cantonese speakers about preserving the language, spoken by some 85 million people worldwide. They fear their children can’t communicate with elderly relatives. Or worse, the Cantonese language and culture won’t survive another generation.

Ceci Pang, a former kindergarten teacher, runs classes for children at Rainbow Seeds Cantonese school in London. Most of her students are from families with mixed heritage.

“Many (parents) want their kids to be able to communicate with their grandparents,” she said. “It’s just so hard here, there are so few learning resources and lots of parents get frustrated and give up. That’s usually the point the parents come to me.”

In the U.K., as in the U.S., most primary and secondary schools offering Chinese teach Mandarin. That’s left many migrant families struggling to find ways to pass on their heritage.

Some turn to social media for advice and camaraderie — a Facebook group called “Cantonese Parents” has thousands of members sharing tips on everything from Cantonese books to YouTube videos. Some organize local Cantonese family meet-ups, while others seek out Cantonese tutors.

Pang said she hasn’t noticed many explicit concerns about Cantonese dying as a language. But, she said, that may change as more Hong Kong migrants settle in the U.K. Britain opened its doors last year in response to China’s crackdown on civil liberties in the city. Since then, thousands of Hong Kong families have fled to the U.K.

“I think in a few years, when more and more Hong Kong families settle here, there may be more parents worried about their children rejecting Cantonese altogether as they become so immersed in the English environment,” she said.

In China, concerns have been voiced for years about a decline in Cantonese, spoken in southeastern China’s Guangdong province and the cities of Hong Kong and Macao. Promoting Mandarin was written into China’s constitution in1982. A suggestion in 2010 to increase Mandarin programs on a Cantonese TV channel caused such a public backlash in Guangzhou, the capital of Guangdong, that the government was forced to give reassurance that Mandarin would not replace Cantonese.

Guangzhou, formerly known as Canton, is considered the birthplace of Cantonese. But today it is a hub of manufacturing and tech jobs attracting Mandarin speakers. Nowadays many young people can only understand Cantonese but don’t speak the language.

While Cantonese is not dominant in people’s lives as it used to be, it’s too early to say the language is in crisis in Guangzhou. It’s still spoken in homes and among friends, and there are Cantonese TV channels as well as Cantonese announcements on public transport.

In contrast, Cantonese has maintained its primacy in Hong Kong. It’s the city’s lingua franca, used by 90% of the population, said Lau Chaak-ming, assistant professor of linguistics at the Education University of Hong Kong.

“Everyone who comes to Hong Kong needs to learn some Cantonese. And in order to succeed in most of the careers in Hong Kong, you need to speak fluent Cantonese,” said Lau, who started an online Cantonese dictionary in 2014 to help people better learn the language.

While most classes in Hong Kong’s schools are still taught in Cantonese, many have added Mandarin to their curriculum as Beijing tries to strengthen its grip over the semi-autonomous city.

The arrival of mainland Chinese for work or education has also boosted Mandarin, and more Hong Kong residents have learned to speak Mandarin to do business with the mainland.

But such changes have not eroded Cantonese, Lau said. “Cantonese has never been stronger in Hong Kong,” he said.

That’s a far cry from the U.S., where even in San Francisco there are few opportunities to pursue Cantonese in high school and beyond. The San Francisco Unified School District has Cantonese and Mandarin immersion programs for preK-8th grades. But in high school, Mandarin is the only option for studying Chinese for foreign language credits.

In 1990, when Grace Yu was hired at City College of San Francisco, there were four Cantonese instructors and a dozen Cantonese classes offered each year. But for the past six years, Yu has been the lone Cantonese professor, teaching only three classes per year.

“Vacancies were not replaced with Cantonese instructors. Instead they hired Mandarin instructors,” said Yu.

She described her situation as “kind of lonely.”

Still, there is a glimmer of hope. One of City College’s trustees — who grew up speaking Cantonese — proposed a resolution to preserve the Cantonese program with at least one instructor. The board approved it this spring.

“Cantonese classes will not be canceled if I retire,” Yu said.

Like Yu, Sik Lee Dennig was the lone Cantonese lecturer at Stanford University until she retired last year. After more than 20 years, the school opted not to renew her contract, which effectively eliminated the Cantonese language program. A “save Cantonese” petition prompted an endowment. But the university would only restore half the classes.

That prompted Dennig to strike out on her own and start a nonprofit, the Cantonese Alliance, to help teachers and interested learners worldwide. The online resource includes podcasts, videos and handouts, as well as Cantonese pop music and comic books.

“Cantonese is not a dialect of Mandarin” as some people mistakenly think, Dennig said recently over a Cantonese dim sum meal of pork and shrimp dumplings.

Cantonese can be especially challenging to learn. In writing, Mandarin and Cantonese use the same Chinese characters. But spoken, the tonal languages — where even the subtlest word inflection can change the meaning — are not similar or interchangeable. Mandarin has four basic tones. Cantonese has nine, which can be difficult to differentiate.

Meanwhile, independent Chinese schools are helping fill the void as Cantonese-speaking communities grow — and not just in Chinatowns.

Aleyda Poe has been overseeing the Cantonese kindergarten at Merit Chinese School in Plano, Texas, for over a decade. Initially a parent who enrolled her two sons to pass along her cultural roots, she is now doing that for other families.

“I hope it’s not a dying language,” Poe said. “But you know, we’ll do our part and see how long they’ll take us.”