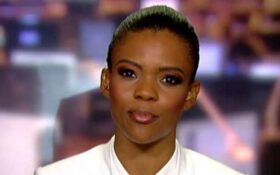 The Daily Wire‘s Candace Owens, a conservative commentator, found herself embroiled in a defamation suit earlier this year with congressional candidate Kimberly Klacik.

However, Klacik agreed Wednesday to let the court dismiss the lawsuit, and she was ordered to pay $115,000 in legal fees, according to court documents reviewed by Owens’ employer The Daily Wire.

Last year, Owens alleged without sound evidence that Klacik had abused narcotics, defrauded her campaign, committed money laundering and worked as a stripper.

Klacik told The Baltimore Sun last year lost a contract with a “nationally recognized vendor” over the 44-minute video.

The Daily Wire found that Owens had filed a motion to dismiss but that the court had never held a hearing on her motion. Rather, the outlet said that Klacik agreed to dismiss the case herself as part of an agreement signed by a judge.

In defamation suits, dueling parties often settle their cases out of court. That way, they can avoid publicizing the embarrassing aspects of their private lives.

Previously, Klacik had claimed the court had held a hearing on Owens’ motion to dismiss. Owens had denied this.

“Basically, the judge has decided he’s not going to dismiss the case as Candace Owens wanted to,” Klacik said on Twitter last year. She added, “I look forward to clearing my name.”

Owens hit back. “To be clear.. Kim and I did not even have a hearing on a motion to dismiss. This simply never took place,” Owens said in a now-deleted post reviewed by Newsweek. “This level of lying is actually incomprehensible to me.”

Klacik received national attention in 2020 for her House campaign’s viral videos. Klacik, a Republican, was running to fill the seat left vacant by the death of Maryland Democrat Elijah Cummings, a vocal critic of former President Donald Trump. Klacik lost the special election by 48 points to Democrat Rep. Kweisi Mfume.

Update on the defamation lawsuit.

Some have been asking what happened with trying to clear my name based on the false accusations/claims Candace Owens made about me… as the case moves forward I look forward to clearing my name. pic.twitter.com/7dulueG1wS