Cancel culture turns on another huge leftist - The Horn News 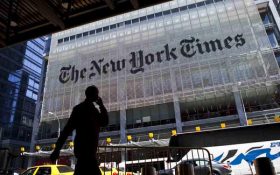 An award-winning journalist has blown the lid off the cancel culture at the country’s most prestigious newspaper, saying that the elitist New York Times forced him to resign… even though his editor knew the charges against him were false.

Donald G. McNeil Jr. has worked at the “newspaper of record” on and off since 1976. For 26 years, he’s traveled the world as a star reporter and, for the last two decades, he’s reported on “diseases that poor people die of.”

His globe-trotting journalism has taken him into places the pampered bosses of the Times would never dream of setting foot in.

He chased the Zika virus — they wouldn’t go to a restaurant that arranged the silverware wrong.

And he pulled in huge audiences with his coverage of the coronavirus.

McNeil’s work has won him some of the highest awards the journalism profession has to offer — and even earned a nomination for the Pulitzer Prize.

But McNeil says the Times couldn’t care less when his top-rank writing came into conflict with the all-powerful forces of the “woke” Left.

A liberal news outlet called The Daily Beast released a story — coincidentally timed just as he was nominated for the Pulitzer—claiming that McNeil used racist language and made offensive statements on a trip he took with high school students to Peru in 2019.

He resigned — but it was obvious to everyone he had been forced out of the paper.

Now, McNeil has come clean in a four-part explanation on Medium that runs more than 20,000 words — and he’s not holding anything back.

He says his editor “twisted his arm” to make him quit, even though his boss knew McNeil — who spent most of his life fighting to save Africans from infectious diseases — wasn’t a racist.

During a 2019 trip to Peru, “A student asked me if I thought her high school’s administration was right to suspend a classmate of hers for using” the n-word “in a video she’d made in eighth grade” at age 12 or 13.

McNeil asked, “Did she actually call someone”… and then he repeated the forbidden slur. “Or was she singing a rap song or quoting a book title or something?”

He didn’t use the word himself in a racist sense; he was asking how the girl used it.

McNeil said he “never dreamed that one of the two Peru trips I took — which to me were just blips in my life” would end his career.

But his real crime was questioning the left-wing racial victim narrative.

When asked if he believed in systemic racism, he replied, “Yeah, of course, but tell me which system we’re talking about,” McNeil wrote. “The U.S. military? The L.A.P.D.? The New York Times? They’re all different.”

That’s not exactly Ku Klux Klan material. He didn’t even deny that “systemic racism” exists; he just said it may not explain every problem, everywhere, every time.

But that’s too much for today’s “woke” teens, who treated him like a cross between David Duke and Joseph Goebbels.

His colleagues piled on, saying that he was a racist for using the word “thug.”

McNeil wrote a public apology—but that wasn’t good enough for Times Executive Editor Dean Baquet, who told him he “knew [McNeil] was not a racist”… but he wanted him gone, anyway.

He demanded and got McNeil’s “resignation”… and the cancel culture got another scalp.

But McNeil also reveals that he may have been fired due to his disability.

“My girlfriend thinks I have a high-functioning Asperger aspect to my personality,” he wrote. And he kept blaming himself, saying he’s “empathic about suffering but I also very much misread audiences.”

Long into McNeil’s defense, he lets slip the real reason he might have been fired.

He made people think — an unspeakable crime in the eyes of cancel culture supporters.

McNeil defended himself by writing, “I have perspectives to offer that they didn’t get at prep school.” and that “I was generally arguing in favor of open-mindedness and tolerance…I think I’m pretty good at judging people as individuals.”

That was his real crime.

They don’t want “open-mindedness and tolerance”: They want religious devotion to the “woke” cult.

And they definitely don’t want anyone “judging people as individuals”: They want people rewarded—and punished—based on their race, sex, sexual preference, and gender identity.

And they got it.