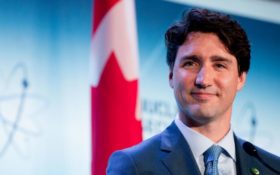 Canadian Prime Minister Justin Trudeau stole the show at the G7 Summit after a video went viral of what appeared to be his eyebrow sliding down his face.

The scandal has become so popular that social media users have deemed it the “EyebrowGate.”

While we may not be speculating that the prime minister wears fake eyebrows, many people have taken the opportunity to poke fun over the possibility that Trudeau does wear some outlandish outfits.

Trudeau was speaking at a joint press conference with French President Emmanual Macron when the camera appeared to show one of the prime minister’s eyebrows falling unusually lower than the other, down his face.

Although it seems to have been a strange coincidence of lighting and angle of the camera, social media users were quick to dive into a conspiracy over Trudeau’s eyebrows.

.@rcmpgrcpolice are apparently on alert after one of Justin Trudeau's eyebrows escaped. #tcot pic.twitter.com/XcC13aiV50

Trump: "Did you wipe that eyebrow glue off your hand, Trudeau?" pic.twitter.com/EvBCNX5eqC

Trudeau's next set of eyebrows will be bigger and better than ever. pic.twitter.com/h6jUNFzIDt

The “EyebrowGate” scandal became so big that it prompted a brand-new account on Twitter named, “Trudeau’s Eyebrows”

Just so you know, yes it's true. Justin Trudeau wears fake eyebrows and takes really good care of us most of the time. But he's really intimidated by @realDonaldTrump, and the sweat loosened the glue that keeps us attached. No biggie

Twitter user Sean Craig dove deep into the investigation and discovered that Trudeau’s left eyebrows “grows thicker on the bottom along the supraorbital ridge.”

While a fake eyebrow scandal would rule, the photographic record shows Justin Trudeau's left eyebrow grows thicker on the bottom along the supraorbital ridge. A streak of thinner hair parts upward closer to the glabella. This is why it can look like a fake eyebrow is falling off. pic.twitter.com/yL7QbAk2mN

What are your thoughts? Vote below!