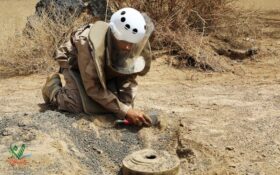 About 30 unexploded munitions were hung from a tamarind tree and scattered around the man’s yard, said Khen Srieng, an official from the Cambodian Mines Action Center, the government agency that oversees mine clearance.

Khen Srieng, who went to the man’s home on Wednesday to collect the munitions for destruction, said they were left over from three decades of civil war that ended in the 1990s and that most of the mines were still active and dangerous.

He said the man used to be a junk collector and had gathered the devices from rice fields and forests near his home to sell as scrap. The man, whose name was not released, told Khen Srieng that after the government banned the sale and purchase of land mines and other unexploded ordnance, he didn’t know what to do with them.

Violators of the ban are rarely if ever prosecuted, because they are generally poor villagers seeking a bit of extra income. CMAC lectured the man for breaking the law.

CMAC chief Heng Ratana, who on his Facebook page described the situation as “unbelievable,” said the man sometimes acted as an unlicensed deminer by clearing mines from the fields of other villagers for money, and then kept them.

The man’s house is in Banteay Meanchey province near the Cambodian-Thai border, where there was combat in the 1980s and 1990s between Cambodian government forces and communist Khmer Rouge fighters.

An estimated 4 million to 6 million uncleared land mines and other pieces of unexploded ordnance remain in Cambodia.

A January report by the Cambodian Mine Action and Victim Assistance Authority said there were 77 casualties from land mines and other unexploded ordnance last year, including 12 fatalities. It said that from 1979 to 2019, such items killed 19,780 people and injured 45,075 others.