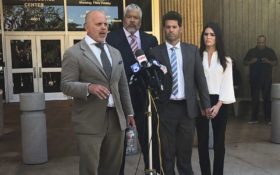 A California surgeon and his girlfriend were charged Wednesday with crimes against five additional victims in addition to two women they were previously charged with drugging and sexually assaulting.

Dr. Grant Robicheaux, 38, and his girlfriend, Cerissa Riley, 31, were charged with rape by use of drugs, kidnapping with the intent to commit a sexual offense and other crimes. The pair pleaded not guilty to all counts in court and a judge ordered their bail raised to $1 million each.

Authorities said Robicheaux, who once appeared in a reality TV show called “Online Dating Rituals of the American Male,” and Riley met women at social events in and once the women were intoxicated, brought them back to Robicheaux’s Newport Beach home and sexually assaulted them, prosecutors said.

“Nobody has a pass to rape or have sexual contact with you once you are unable to give consent,” Orange County District Attorney Tony Rackauckas said at a press conference.

The couple was initially charged last month in the assault of two women. Prosecutors held a press conference, and then said they received new information that led to the additional charges.

Authorities now believe there could be additional victims in Los Angeles or San Diego counties as well as Nevada, Colorado and Louisiana, said prosecutor Jennifer Walker.

Robicheaux and Riley face up to life in prison if convicted.

During Wednesday’s court hearing, Riley turned back briefly to see her friends and family in the courtroom gallery and fought back tears. Afterward, they walked up and hugged her, and she cried, telling them, “thanks for coming.”

Philip Cohen, Robicheaux’s attorney, said the couple had traveled internationally since a search warrant was served at Robicheaux’s home in January and electronics were seized that allegedly contain a trove of video evidence that he has not yet seen.

“It is Grant and Cerissa’s absolute position that no non-consensual sex ever took place,” Cohen told reporters while standing with the defendants outside the courthouse in Newport Beach, California.

Both defendants posted bail and are due back in court on Jan. 18.

In a statement, the couple said they had “great friends, great lives and great careers” before they were arrested last month and added: “We look forward to getting our lives back.”

The charges span from 2009 to 2018 and also include possession for sale of cocaine, ecstasy and the drug GHB. Robicheaux also is charged with illegal possession of two assault weapons.

Prosecutors said that the couple was drinking with a woman at a Newport Beach bar in October 2016 until the woman became intoxicated, and then brought her home. The woman woke up to Robicheaux trying to sexually assault her and screamed until a neighbor called police, prosecutors said.

In an unusual twist, Orange County Supervisor Todd Spitzer held a press conference and handed out copies of search warrant documents tied to the case. Spitzer, who is challenging longtime District Attorney Tony Rackauckas for his job in next month’s election, said the records show prosecutors should have acted sooner on the allegations after a January search of Robicheaux’s home.

Later in the day, the district attorney’s office complained to the judge that these records were sealed and the release could jeopardize the case. Judge Gregory Jones then ordered media outlets including The Associated Press, Orange County Register and others to return the copies and not to publish the contents.