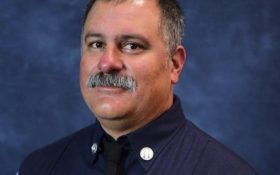 A resident of a retirement home in Southern California opened fire on firefighters responding to a report of an explosion in the building, killing a veteran fire captain and wounding a second firefighter and another person, officials said.

The shooting happened after firefighters responded to a 3:49 a.m. alarm at the 11-story retirement facility in Long Beach, south of Los Angeles, and found some windows blown out, activated sprinklers, the smell of gas and a fire that they extinguished, authorities said.

Fire Capt. Dave Rosa, who had worked for the department for 17 years, died at a hospital Monday morning, DuRee said. He is survived by a wife and two children, the chief said.

The other firefighter who was shot was not immediately identified and was hospitalized in stable condition. A third person was also struck by gunfire during the “chaos” Monday morning and was in critical condition and undergoing surgery, said Police Chief Robert Luna. No further details were provided about that person.

Luna said a “person of interest” — who police believe is a resident at the facility — was detained at the scene and was being questioned by investigators. A weapon was recovered at the scene, he said.

“There is a big puzzle to put together,” Luna said of the investigation.

Investigators were looking into whether the shooter intentionally lured first responders to the scene to ambush them, Luna said.

Police also called for bomb squad investigators after they discovered “a couple of devices they deemed to be suspicious” and they were still examining those items Monday morning.

The residential tower near downtown Long Beach has 100 apartments for low-income people age 62 and older as well as disabled adults over age 18, according to its website.

Luna said police officers and firefighters “go to these scenes and you never know what’s on the other side of those doors.”

He added: “And these brave firefighters went through those doors and unfortunately they were met with gunfire.”

Long Beach is a major port city with a population of more than 400,000.