California braces for brutal winter amid megadrought - The Horn News 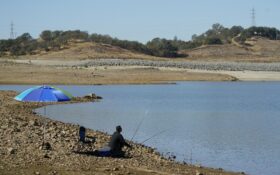 The past three years have been California’s driest on record and state officials said Monday that they’re preparing for the streak to continue.

The official water year concluded Friday, marking an end to a period that saw both record rainfall in October and the driest January-to-March period in at least a century. Scientists say such weather whiplash is likely to become more common as the planet warms. It will take more than a few winter storms to help the state dig out of drought.

Though its impossible to predict with certainty what the winter will bring, “we are actively planning for another dry year,” said Jeanine Jones, drought manager for the state Department of Water Resources.

Jones spoke alongside state climatologist Michael Anderson about the just-completed water year. The water year runs from Oct. 1 to Sept. 30, so that the rainiest winter months are recorded together.

Snow that falls in California’s mountains typically provides one-third of the state’s annual water supply, but last year snow levels were far below average by the end of the winter. The Colorado River, another major source of water for Southern California, is also beset by drought, threatening its ability to supply farmers and cities around the U.S. West.

Precipitation was 76% of average for the year that just ended, and the state’s reservoirs are at 69% of their historical levels, state officials said. The 2022 water year was slightly cooler and wetter than the year before, though not enough to change the trajectory of the drought, Anderson said.

Most of the state is in severe or extreme drought, according to the U.S. Drought Monitor. The worst conditions are throughout the Central Valley, the state’s agricultural heartland where many of the nation’s fruits, vegetables and nuts are grown.

Meanwhile, the weather phenomenon La Niña is expected to occur for a third straight year. Though the weather pattern was dry in previous years, its tricky to predict how it will affect California this year, Anderson said.

Another dry year would mean little to no water deliveries from state supplies to Southern California cities beyond what’s needed for drinking and bathing. Farmers who rely on state and federal supplies would also see minimal water during another dry year, putting even greater strain on groundwater supplies often used as a backup to keep crops alive.

Farmers in the Sacramento Valley had a particularly rough water year, state officials said. About 600 square miles (1,554 square kilometers) of farmland, including a lot of rice fields, were fallowed in the valley this year, according to the Northern California Water Association and California Rice Commission.

Gov. Gavin Newsom, meanwhile, continues to urge California’s 39 million residents to save water wherever possible by ripping out grass lawns or letting them go brown, taking shorter showers and generally being more conscious about water use. He called in summer 2021 for people to voluntarily cut their water use by 15% from 2020 levels, though the state is far from meeting that target.

Californians lowered their water use in August by 10.5%, water officials said Monday. But collectively, statewide water savings are down just 4% since Newsom made his request.

Though people who live in cities and rely on major water suppliers shouldn’t be concerned about water reliability, water may start to cost more as suppliers build recycling plants or other new infrastructure to shore up supply, Jones said.

“We encourage people to learn and understand about where their community’s water supply comes from and what’s going to be needed to make it better in the future,” she said.

There are signs that the state and its residents are better learning to deal with ongoing dry periods, said Jeff Mount, a senior fellow with the Water Policy Center at the Public Policy Institute of California.

“We’re not fighting anymore about whether things are changing — we’re having reasonable fights about how to adapt to it,” Mount said.

Looking to the future, state officials say they expect California’s water supply to decline by 10% over the next two decades. Newsom in August touted recycling and desalination as ways to shore up the state’s supply. Now, its time for the administration to turn that list of options into a clear set of priorities, Mount said.