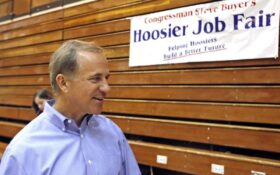 A former U.S. congressman from Indiana was charged in an insider trading scheme revealed on Monday with the unsealing of indictments in New York City.

It was one of the most significant attacks by law enforcement on insider trading in a decade, and a prosecutor and other federal officials pledged fresh enthusiasm for similar prosecutions in the future. They said the cheating resulted in millions of dollars of illegal profits for the congressman and other defendants.

One defendant — former Rep. Steve Buyer, R-Ind. — is facing charges from both the SEC and federal prosecutors in Manhattan.

Manhattan’s U.S. Attorney Damian Williams told a news conference that the cases, in addition to several other recently announced crackdowns on insider trading, represent a follow through on his pledge to be “relentless in rooting out crime in our financial markets.”

The authorities also announced indictments against eight other people in four separate, unrelated incidents of insider trading. The authorities singled out not only Buyer, but also an investment banker, a man training to be an FBI agent and some executives at technology companies.

“We have zero tolerance, zero tolerance for cheating in our markets,” said Gurbir S. Grewal, director of the SEC Enforcement Division.

One indictment identified Stephen Buyer as someone who misappropriated secrets he learned as a consultant to make about $350,000 illegally. Buyer, a Republican congressman from 1993 through 2011, served on committees with oversight over the telecommunications industry, the indictment said.

Buyer, arrested Monday in Indiana, was accused in court papers of engaging in insider trading during a merger of T-Mobile and Sprint, among other deals. Documents said he leveraged his work as a consultant and lobbyist to make illegal profits.

Buyer and his lawyers have yet to publicly comment on the accusations.

In a civil case brought by the Securities and Exchange Commission in Manhattan federal court against Buyer, he was described as making purchases of Sprint securities in March 2018 just a day after attending a golf outing with a T-Mobile executive who told him about the company’s then nonpublic plan to acquire Sprint.

“When insiders like Buyer — an attorney, a former prosecutor, and a retired Congressman — monetize their access to material, nonpublic information, as alleged in this case, they not only violate the federal securities laws, but also undermine public trust and confidence in the fairness of our markets,” Grewal told the Associated Press.

He told the news conference that the arrests were not only meant to send a signal to financial industry professionals to protect secrets and follow the law, but also were “intended to send an equally strong message to the investing public” that regulators and law enforcement were focusing on keeping the markets clean.

According to the SEC, Buyer bought Sprint Corporation stock after confidentially learning about T-Mobile’s plans to acquire Sprint. Buyer allegedly used his gains to benefit both himself and his inner circle.

The agency wrote in a 16-page complaint:

Before the Sprint acquisition was disclosed publicly, Buyer spent more than $568,000 to purchase 112,675 shares of Sprint stock. Buyer spread those purchases among accounts for himself, a joint account with his cousin, and an account for a woman with whom he had a romantic relationship…

After news of the planned acquisition was disclosed publicly in April 2018, Buyer reaped ill-gotten gains of approximately $107,987.

Insider trading has become salient since Congress’s big scandal in 2020, with some representatives selling their stock after receiving private briefings about the pandemic’s likely effects on the stock market.

Amid news of Buyer’s scandal, Twitter users expressed frustration with their elected representatives. One user, hearing the news of the indictments, simply said, “Good”!

Buyer represented central Indiana between 1993 and 2011. In Congress, he achieved national attention for his views on tobacco regulation.

In 2009, he cast doubt on the health effects of smoking tobacco. On the House floor, he debated the Family Smoking Prevention and Tobacco Control Act, and he argued that smoking lettuce was equally as bad as smoking tobacco.

“You could have smoked that lettuce and you would still end up with the same problems,” he said. “You could cut the grass in your yard, dry it and roll it up in a cigarette and smoke it, and you’re still going to have a lot of problems. It is the smoke that kills, not the nicotine. It’s the smoke.”

Since leaving Congress, he has begun working with R. J. Reynolds Tobacco Company.

The Horn editorial team and the Associated Press an