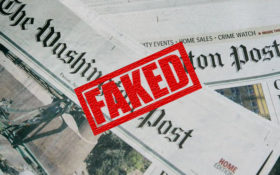 There’s a major crisis unfolding at the border. No, wait, there isn’t. Yes, there is – but it’s a decades-old crisis from long before President Donald Trump that’s already improving without his help.

No, wait, there IS a crisis, it’s TOTALLY NEW and Trump CAUSED it.

Confusing? You bet it is… especially when you consider that all of those hot takes from the past week come from the same place: The Washington Post.

On Jan. 5, The Washington Post — in its news reporting, not a random opinion piece – declared a “bona fide emergency at the border.”

Record numbers of migrant families are streaming into the United States, overwhelming border agents and leaving holding cells dangerously overcrowded with children, many of whom are falling sick.

The newspaper called it a “humanitarian crisis.”

When Trump agreed just a few days later and used a rare Oval Office address to discuss the “bona fide emergency” and “humanitarian crisis,” the newspaper did an immediate about-face.

Agree with Trump? Can’t have that!

That led to this embarrassing little spectacle on Twitter:

After years of Trump’s dire warnings, a "crisis" has hit the border but generates little urgency https://t.co/OEpDmut5h0

The newspaper didn’t see the contradiction.

“The news story reported on the actual emergency at the border – the surging numbers of migrant families seeking asylum, the challenges that the U.S. government is facing in detaining them, and the deaths of immigrant children in U.S. custody,” Washington Post Executive Editor Martin Baron told Fox News. The analysis, he said, “appropriately pointed out that Trump’s description of the problem relies on mischaracterizations and dubious claims.”

And then this gets even worse.

On Tuesday, as the president spoke, The Post declared in a supposed live fact-check of the speech that “there is no NEW crisis at the border” (emphasis ours).

So there IS a crisis when Trump ignores it.

Then there ISN’T a crisis when Trump talks about it.

Then there’s a crisis all over again, but it’s not NEW. The implication there is staggering: If it’s an OLD crisis, isn’t that proof Trump’s predecessors failed – and he’s trying to fix their mistakes?

What makes that one especially glaring is that the Post’s own numbers contradict that narrative and PROVE the situation at the border is getting worse.

And sure, over the long term, that’s an improvement.

Here’s the other thing the Post fails to note: the drop in apprehensions since the year 2000 also happened to coincide with the building of… you guessed it… a WALL!

In 2006, President George W. Bush signed the Secure Fence Act into law, which passed Congress with widespread bipartisan support. That led to the construction of 548 miles of fencing along the border.

And as that fence was built, illegal crossings and apprehensions plunged.

So, yes, walls work – at least to some extent – and Democrats weren’t afraid to admit that not too long ago.

By Thursday, as Trump visited the border, the Washington Post decided to have it both ways.

“Trump is right: There is a crisis at the border,” the newspaper declared in a blaring headline to an opinion piece. “But he’s causing it.”

You have to wonder what take they’ll have tomorrow. Odds are, it’ll be the opposite of whatever’s in the newspaper today!