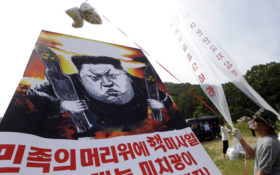 Not so fast, Kim Jong Un!

North Korea’s controversial intercontinental ballistic missile test on Tuesday caught much of the world offguard, and the country’s dictator has seemed gleeful about showing up President Donald Trump on America’s Independence Day.

There was only one group not surprised: The U.S. military.

A high-ranking senior official told Fox News that U.S. officials watched North Korea prepare and fuel it’s first missile the entire time — and chose not to deploy an anti-missile defense system to shoot down the rocket.

In other words, Trump and Defense Secretary Jim “Mad Dog” Mattis were both ahead of the game — but let the test go on to give the military all the information they wanted regarding Kim Jong Un’s capabilities.

“Clearly we watch North Korea very closely,” Pentagon spokesman Capt. Jeff Davis said in a press briefing. The launch was from an area previously unused by the reclusive communist country, but was caught early in the process by our military.

“Given the apparent advance notice enjoyed by U.S. officials, the Pentagon could have decided to try to shoot the ICBM down using the U.S. missile defense shield components in the region,” Fox News reported. “But because the missile wasn’t a threat to North America, the U.S. declined to attempt to terminate the rocket, which flew 1,700 miles into space and was in flight for 37 minutes.”

Trump, since entering the White House, has placed a particular focus on pushing China — North Korea’s biggest trading partner — to use its influence and ramp up economic pressure. Trump expressed optimism after his first meeting with China’s President Xi Jinping that the two would work together effectively on the issue, but in recent days Trump has increasingly conceded the strategy has not produced fast results.

Trade between China and North Korea grew almost 40% in the first quarter. So much for China working with us – but we had to give it a try!

As he flew to Poland on Air Force One, Trump spoke by phone about the North Korean threat with Egyptian President Abdel Fattah el-Sisi, emphasizing the need for countries to implement U.N. Security Council resolutions. The White House said Trump also discussed the need for nations to “stop hosting North Korean guest workers” — an issue Secretary of State Rex Tillerson also mentioned in his response a night earlier to the missile launch.

Restricting guest workers is one way the U.S. and other countries could try to reduce North Korea’s access to foreign currency. There are some 50,000 to 60,000 North Korean workers abroad, mostly in Russia and China, South Korea’s spy service has said, including at about 130 restaurants North Korea operates overseas. The workers’ mission involves earning money to bring into North Korea.

In his initial response to the launch on Monday evening, Trump urged China to “put a heavy move on North Korea and end this nonsense once and for all!” But he also said it was “hard to believe” that South Korea and Japan, the two U.S. treaty allies most at risk from North Korea, would “put up with this much longer.”

North Korea conducts about 90 percent of its trade through China. In April, Chinese customs data said total two-way trade between China and North Korea increased 36.8 percent in the first quarter of this year compared with the same period a year earlier.