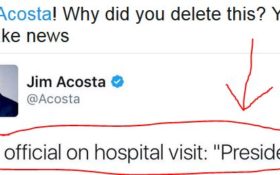 Wednesday, Acosta was caught red handed using an “anonymous source” to spread a nasty lie about Trump to tens of thousands of readers — and so far has refused to apologize.

When Trump went to visit House Majority Whip Steve Scalise in the hospital, who in critical condition after an apparent assassination attempt by a liberal terrorist, Acosta was ready with a quote from an “anonymous source” — which critics say Acosta made up.

At 9:44 pm, Acosta quoted an unnamed White House official to spread what has called a left-wing conspiracy theory on the president on Twitter, saying: “WH official on hospital visit: ‘President Trump did not meet with Scalise and did not go into the room where Scalise is being treated.'”

The tweet was shared over 2,000 times and reached tens of thousands of readers — and was then conveniently deleted without apology.

However, The Horn News has the picture Acosta can’t delete — 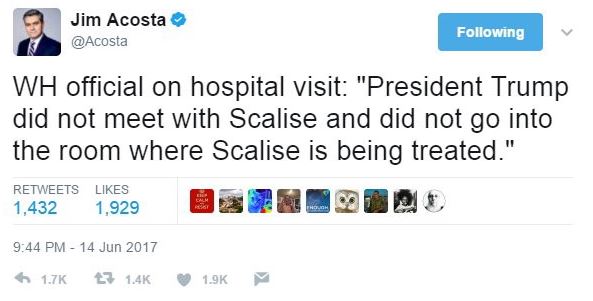 Sponsored: Free book available to all Americans (open to claim yours)

Notice the difference in “re-tweet” shares?

With the damage already done, Acosta has refused to address his spreading misinformation. He even tried to subtly blame the false tweet on other reporters, using the term “new pool report” — which means a new report from among a pool of reporters — in his correction.

But in the original tweet, however, Acosta wrote that he had a direct quote from an anonymous source from inside the White House, not rumors spread among other reporters.

Folks, this is a prime example on how the liberal media uses lies and misinformation spreads — and it is undeniable proof that CNN is “very fake news.”