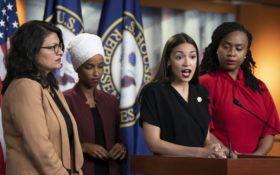 The House Ethics Committee said Monday it is investigating allegations of wrongdoing against Michigan Rep. Rashida Tlaib, a freshman Democrat and member of the far-left “Squad.”

The committee did not reveal the nature of the complaint, but the offices of her and two other accused lawmakers said they are related to campaign spending.

Tlaib and the two other lawmakers denied wrongdoing, saying in separate statements that they were cooperating with investigators.

The complaint against Tlaib focused on her decision to pay herself $4,000 a month in salary from her 2018 campaign account, an action that conservative groups called improper.

A spokesman for Tlaib called the complaint politically motivated. Tlaib is an outspoken critic of President Donald Trump and has been the focus of repeated attacks from Trump and other Republicans.

“Representative Tlaib fully complied with the law and acted in good faith at all times,” said Denzel McCampbell, a spokesman for Tlaib.

The ethics panel began the reviews after separate referrals from the independent Office of Congressional Ethics, which investigates complaints against House members.

The panel says it will announce their next steps in November.