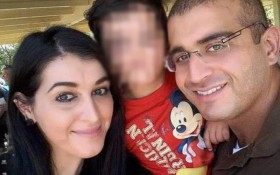 The wife of Orlando nightclub gunman Omar Mateen faces a court hearing in California after being arrested there in connection with his Florida shooting rampage that left 49 people dead.

Following the horrific terror attack in June, The Horn News reported that authorities believed she knew about the attack ahead of time, and federal prosecutors were seeking to charge her as an accessory to murder.

Now over six months later, the feds are closing in.

Noor Salman, 30, is scheduled to make an initial appearance in federal court Tuesday morning in Oakland, following her arrest a day earlier on Florida charges that authorities said include obstruction of justice and providing material support to a foreign terrorist organization. They gave no further details on her alleged role or what specific actions led to the charges.

Salman is from the San Francisco Bay Area and in the aftermath of the Orlando attack that also left her husband dead she returned here with their son, whose name she has since sought to change.

She had been repeatedly questioned by FBI investigators over whether she had any knowledge of her husband’s plans.

Her attorney Linda Moreno said after her arrest that she “had no foreknowledge nor could she predict what Omar Mateen intended to do that tragic night.”

Salman knew her husband had watched jihadist videos but was “unaware of everything” regarding his intent to shoot up the club, Salman said in a New York Times interview published in November.

Salman also said he had physically abused her, which her attorney reiterated Monday.

“Noor has told her story of abuse at his hands,” Moreno said. “We believe it is misguided and wrong to prosecute her and that it dishonors the memories of the victims to punish an innocent person.”

The San Francisco office of the FBI said Salman was taken into custody Monday morning in Rodeo, which is the small Bay Area community where she grew up and where her family lives. Jail records, however, say she was arrested about 30 miles away in Dublin. The reason for the discrepancy wasn’t clear.

U.S. Attorney General Loretta Lynch said in a Monday interview with MSNBC that “from the beginning, we were going to look at every aspect of this, of every aspect of this shooter’s life to determine not just why did he take these actions — but who else knew about them? Was anyone else involved?”

Salman met Mateen online and the two married in 2011.

They lived in Fort Pierce, Florida, at the time of the shooting.

Mateen pledged allegiance to the Islamic State group in a 911 call during the three-hour standoff that ended in his death. Forty nine patrons were killed and another 53 were hospitalized.

“Nothing can erase the pain we all feel about the senseless and brutal murders of 49 of our neighbors, friends, family members and loved ones,” Orlando Police Chief John Mina said Monday. “But today, there is some relief in knowing that someone will be held accountable for that horrific crime.”