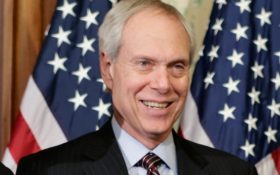 The mainstream media just spread some nasty fake news about Donald Trump’s speech at the Conservative Political Action Convention (CPAC) 2017 — and former Secretary of State Hillary Clinton’s pals were behind the whole thing.

Why you should NEVER drink this kind of water [sponsored]

If you believe the spin, Trump supporters were allegedly seen waving Russian flags during the president’s speech.

But The Horn News is here, and we know the truth the media won’t tell you.

These flags were a liberal stunt. CPAC staffers quickly escorted the man responsible for trying to spread them, and pitched those he handed to confused guests in the trash.

And it was Clinton pal and political attack dog Bob Creamer’s organization, “Americans Take Action” behind the whole thing.

That’s according to Project Veritas’ James O’Keefe, who tweeted the following —

This was Ryan Clayton from Bob Creamer group "Americans Take Action" handing Russian flags. Ryan was forcibly removed. You edited that out. https://t.co/hKwywREjn5