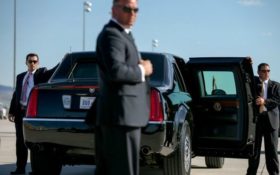 A man whose company scoops up pet poop has been placed on probation for two years and fined $500 for buying fake Secret Service identification cards and badges online to impress women on a dating site.

Christopher Diiorio, 54, of Greensburg, was sentenced Monday by a federal judge in Pittsburgh. He had pleaded guilty in November to fraudulently using an official seal, but acknowledged behavior in two other counts dismissed Monday: flashing an ID card during a traffic stop and trying to use a Secret Service badge to get a government rate for a hotel room.

“Your honor, I’m not a bad man, I’m a dumb man,” Diiorio told U.S. District Judge Nora Barry Fischer. “What I did was truly stupid and I’m very sorry for that.”

Defense attorney William Difenderfer said he was “very happy” with the sentence which, among other things, will enable Diiorio to continue helping his widowed mother care for his disabled sister and continue in counseling to save his marriage. Diiorio’s wife, who was not in court, is one of the women he met online while holding himself out as a Secret Service agent.

The investigation began when police in the Pittsburgh suburb of Reserve Township said Diiorio flashed a Secret Service ID card when an officer pulled him over for a faulty brake light on July 22. The hotel incident occurred a month earlier.

Diiorio told the officer he was a Secret Service agent who had just returned from the Republican National Convention in Cleveland. His credential said Diiorio was a senior special agent in the protective services division and, upon further investigation, authorities learned that Diiorio’s first and last name just happened to match those of a real Secret Service agent who Diiorio has never met.

Assistant U.S. Attorney Paul Hull told the judge that the case was especially troubling because Diiorio owned several weapons and passed himself off as a protective agent in a presidential campaign year.

“What we hope by bringing this case is to deter others” from doing the same thing, Hull said, “particularly in a campaign year.”

Diiorio told investigators he bought the IDs and badges for $100 online in March 2014 when he also began to identify himself as a federal agent on online dating sites and his former Facebook page. In reality, Diiorio owned and operated Doodle Scoopers — a very successful business based in the Pittsburgh suburb of Bethel Park — and a second business that sells gourmet, home-baked treats for dogs.

Diiorio had also begun buying handguns and rifles, one that looked like those used to equip Secret Service agents. Diiorio had to surrender the weapons because he pleaded guilty to a felony.

Authorities haven’t named the Chinese company that created and sold the credentials.