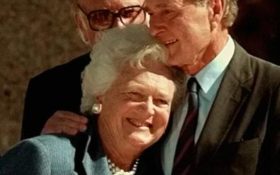 CBS News spread fake news on Sunday when they mistakenly published an obituary for former first lady Barbara Bush after a family spokesman announced she was in failing health.

Apparently the all caps “DO NOT PUBLISH” was not enough to stop this fake news channel from sharing the fake obituary.

According to The Sacramento Bee, the first lines of the story read, “Barbara Bush, the witty, gregarious matriarch of a political dynasty that propelled two of its members to the White House and dominated Republican politics for decades, has died after a series of recent hospitalizations. She was 92. A Bush family spokesman said Bush passed away peacefully in her home, surrounded by loved ones.”

Many news outlets do prepare obituaries for public figures prior to their passing so that they stories are ready for send when needed.