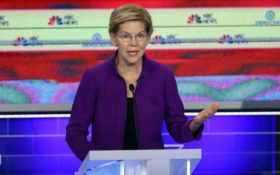 The first Democratic presidential debate Wednesday was full of misinformation, fabrications, and straight lies — and The Horn News has narrowed the list down to the five biggest whoppers.

“I would do several things, starting with something we should have done a long time ago, which is to pass the Equal Rights Amendment, finally, in this country,” Castro said. “And also, pursue legislation so that women are paid equal pay for equal work in this country.”

The truth: This has already happened… over 50 years ago.

It has been illegal to pay men more than women, for the same work, since 1963 when the Equal Pay Act was passed.

The so-called “gender wage gap” is a frequent lie pushed by Democrats to exaggerate the amount of discrimination faced by women in the United States, critics say. Economists regularly debunk the myth, explaining that gender pay disparities are nuanced and can be explained by work design, not discrimination.

A 2018 study from the Harvard Business Review found that when Democrats force companies to disclose gender pay disparities, the pay gap does shrink. However, the pay gap doesn’t become more equitable because women’s wages increased.

“The bottom 60 percent [of workers] haven’t seen a raise since 1980,” Ryan claimed. “The top one-percent control 90 percent of the wealth.”

The Truth: Ryan is lying about the state of income and wealth inequality in the United States. The Congressional Budget Office calculates that the bottom 80 percent of Americans have seen their real incomes rise over 30 percent since approximately 1980.

While that is certainly lower than the doubling of income enjoyed by the top 20% of income earners, it’s still a nice raise. And the richest one-percent possess 32 percent of the nation’s wealth, according to data from the Federal Reserve, not 90 percent.

“If everyone is moving up the income ladder, why doesn’t the median income go up?” American University Professor Brad Schiller wrote in The Los Angeles Times in January. “Because millions of new workers enter the labor market every year. Immigrants, the high school dropouts, college grads, newly working moms and others are entering the market every day. Most of these entrants start out at or near the bottom of the income ladder, putting a lid on measured growth of median incomes.”

“With a growing population and a dynamic economy, the people inhabiting the middle-class changes every year. Even if the median household income never changed, people would still be improving their circumstances.”

The Truth: O’Rourke is lying about the size of the Trump tax cut. The Joint Committee on Taxation estimates that it will reduce tax revenues by $1.5 trillion over the next 10 years.

Individual taxpayers are receiving the bulk of those cuts, getting $1.1 trillion. Employers will get $654 billion, which are often offset by higher tax revenues from changes to international tax law.

The tax cuts mostly favored Americans who paid more in taxes. It also reduced federal subsidies to some states, and taxpayers in states with the highest state income taxes (all Democratic controlled) may have seen their tax bill go up. However, it lowered federal income tax payments across the board for almost all Americans.

“Trump’s tax bill was rooted firmly in the social justice progressive principle of fairness — the same principle widely promoted by all of the Democratic candidates for president,” The Hill wrote in April.

“The social justice logic is that it is unfair for taxpayers throughout the country to subsidize the big-spending, progressive notions of the blue states. The rest of the country did not elect the state and local officials who created these programs and then raised state and local income taxes, property taxes and sales taxes, or sneaked them in through tax-supported bond issues.”

“This economy is not working for average Americans,” Booker later said.

The Truth: The economy is booming and unemployment is at record lows for average Americans. According to the Bureau of Labor Statistics, there has been significant income growth for the average American since Trump took office.

Across the board, unemployment is at a near 50-year low. Throughout Trump’s tenure, unemployment has been at (or near) record lows for Asian, Hispanic, and African-Americans.

“Wages in May for nonsupervisory employees were up 3.4 percent year over year, the tenth consecutive month at or above three percent. That’s all the more impressive because inflation is running around 1.5 percent. Prior to Trump’s presidency, average wages have not risen by more than three percent since 2009,” Breitbart reported Thursday.