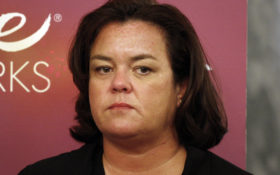 Where’s the fawning media on this? The silence is deafening.

Overall, she gave a combined $5,400 over the limit to five different candidates.

When reached by The Post, O’Donnell fessed up, claiming it was “nothing nefarious” and that she goes to leftist websites late at night to donate to anti-Trump candidates.

“My anxiety is quelled by donating to those opposing Trump [and] his agenda — especially at night — when most of these were placed,” she wrote.

The money includes $4,700 to Alabama Sen. Doug Jones, who was running against Republican Roy Moore in last year’s special election, as well as $3,600 for Pennsylvania Rep. Conor Lamb who won a special election earlier this year.

She has also sent $2,950 to California Rep. Adam Schiff, who is more known for his TV appearances slamming Trump than his actual legislative work.

The Post said she sent $4,200 to Lauren Underwood, a candidate for Congress in an Illinois primary, and $3,450 for Omar Vaid, a New York City congressional candidate.

But even when she admitted to doing it, O’Donnell refused to take responsibility.

In fact, she blamed the websites and the candidates.

“If 2700 is the cut off — [candidates] should refund the money,” she wrote to the newspaper. “I don’t look to see who I can donate most to … I just donate assuming they do not accept what is over the limit.”

This ham-handed attempted to swing elections to the left isn’t getting much attention from the mainstream media.

And O’Donnell herself doesn’t see any irony in her slamming the Trump administration while breaking the law herself. As recently as Thursday she had the nerve to call out Michael Cohen over the payments he was alleged to have received.

But isn’t she also “paying” to “play” by contributing more than the legal limit to five federal candidates, at least two of whom now hold office?

“It seems clear, from what we know, that Rosie broke the law and she broke the law five times,” conservative author Dinesh D’Souza told Fox News. “What makes it particularly sneaky on her part is that she used four different names and five different addresses. It seems clear that she knew what she was doing and she tried to cover her tracks.”

D’Souza knows a little about these laws.

He pleaded guilty in 2014 to breaking them, although in his case it wasn’t small-dollar donations to candidates around the country. He used straw donors to funnel $20,000 to a single candidate.

Unlike D’Souza, O’Donnell didn’t use straw donors and the “different names” are actually just typos or a missing apostrophe, the records show.

But the law is the law – and even if she’s sloppy and didn’t intend to break it, shouldn’t it matter?

Will @Rosie be held to the same standard as @DineshDSouza for illegally exceeded campaign contribution limits? https://t.co/WbTC9BUFnT via @MailOnline

“Of course not,” former Arkansas Gov. Mike Huckabee wrote on Twitter. “Laws are ignored for liberals and weaponized for conservatives. And Americans are sick of the double standard.”

Of course not. Laws are ignored for liberals and weaponized for conservatives. And Americans are sick of the double standard. https://t.co/W73jNxP2E1