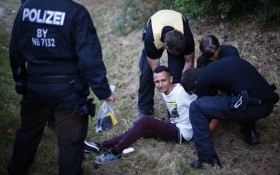 Romanian border police have found 91 migrants from Iraq and Syria hidden in a truck transporting auto parts. They told police they were trying to reach the visa-free Schengen travel zone.

Police stopped and searched the vehicle with Turkish plates early Tuesday at the crossing point between Nadlac and Csanadpalota in Hungary. According to documents, it was transporting the parts to Norway.

Police found 44 men, 18 women and 29 minors aged 2 to 17. The migrants told police they wanted to reach the Schengen zone. Hungary is a member, but Romania isn’t.

The driver told Romanian authorities he did not know about the migrants.

The migrants are being probed on suspicion of illegally attempting to cross the border, while the driver is suspected of being an accomplice.