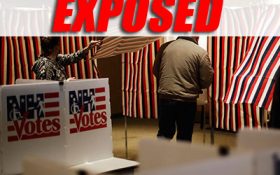 Every election, stunning incidents of mass election fraud go unreported by the mainstream media. In 2017, The Horn News uncovered examples of voter fraud in every single state in the Union.

But despite President Donald Trump’s warnings that election results could be rigged and reports of thousands of “found” ballots appearing in rental cars days after the 2018 election, Democratic lawmakers and the media continue to insist that voter fraud “doesn’t exist.”

Authorities in California have evidence it does — and police officers on skid row finally did something about it.

Nine people were arrested in Los Angeles in the lead-up to the 2018 midterm election for paying homeless people to fraudulently register to vote and falsely sign ballot petitions, The Los Angeles Times reported in September. Charges were filed against the defendants three weeks ago, but only made public Tuesday.

What was found is shocking — though not surprising.

The defendants reportedly downloaded lists of registered voters from across the state and set-up tables late at night in Los Angeles’ skid row. Using cash and cigarettes, they paid the homeless to forge signatures on state ballot petitions and voter registration forms. Local police in the area became aware of the illegal scheme and used undercover officers and security footage to arrest the ringleaders.

“They paid individuals to sign the names,” Los Angeles Police Officer Deon Joseph told The LA Times. “That’s an assault on our democracy.”

According to The Washington Times, “The charges include circulating a petition with false names, use of false names on a petition, and voter fraud by registering fictitious or nonexistent persons.”

Once those arrested were processed, though, the district attorney’s office in the heavily-Democratic city quietly reigned back the punishments. The defendants were originally charged with felonies; those charges were all later reduced to misdemeanors.

Five of the defendants were arraigned in Tuesday in the Superior Court.

“The message got sent this is not big deal,” Joseph said to The LA Times. “They’ll go right back out and do the same thing.”

In total, the nine defendants reportedly submitted hundreds — if not thousands — of falsified petition signatures and voter registrations. The arrests mirrored a similar crackdown in a heavily-Democratic area in Texas on Nov. 8th, when nine individuals were arrested in what authorities called an illegal voting scheme.

The story begs the question: How many Democrats did the same thing… but weren’t caught?