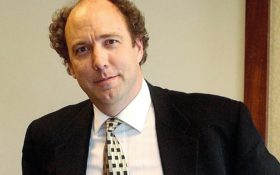 A South Dakota man who was linked to an admitted Russian covert agent agreed to plead guilty in a fraud scheme that authorities said bilked at least $2.3 million from 78 people, according to a court filing Monday.

Businessman and conservative political operative Paul Erickson agreed to plead guilty to one count of wire fraud and one count of money laundering. Each charge carries a maximum sentence of 20 years in prison.

An affidavit accused Erickson of promising returns of up to 150% while spending the money on personal expenses for Maria Butina, his former girlfriend. Butina was deported this year after admitting she sought to infiltrate conservative U.S. political groups and promote Russia’s agenda.

The allegations against Erickson involved a variety of schemes that appeared unrelated to Butina’s case.

In February, Erickson pleaded not guilty to 11 counts of wire fraud and money laundering, a day after he was indicted, according to the South Dakota U.S. Attorney’s Office.

Prosecutors said Erickson defrauded “many victims” from 1996 to August 2018. The indictment accused Erickson of concocting multiple schemes to carry out well over $1 million in fraudulent transactions, including recruiting investors for a string of elder care homes; developing a wheelchair that allowed a person to use the bathroom from the chair; and home-building in North Dakota’s booming oil fields.

Although some of the accusations go back 20 years, the affidavit said Erickson came to the attention of the FBI in 2016 when a woman selling land in the North Dakota oil patch told authorities that a group of investors had paid Erickson $100,000 for the same land. The investigation led authorities to conclude Erickson ran the fraudulent schemes.

Prosecutors alleged Erickson made false representations to get people to invest in the schemes. His attorney, Clint Sargent, did not immediately reply to messages from The Associated Press on Monday for comment on the plea agreement.

The U.S. Attorney for South Dakota declined to comment.

The judge also may order restitution to victims other than those covered by the conviction, the filing said. Erickson agreed to help the government in identifying, locating, returning and transferring assets to pay any financial obligations imposed at sentencing. If no prison time is ordered, Erickson agreed that payment of any court-ordered financial obligations will be a condition of probation.

Butina pleaded guilty last December to trying to infiltrate conservative political groups as a Kremlin secret agent. Butina said in her plea agreement that she “sought to establish unofficial lines of communication with Americans having power and influence over U.S. politics” and that Erickson helped her as she tried to use his ties with the National Rifle Association to set up the back channels.

Erickson, described by one of his victims as a “charismatic gentleman,” was national political director for Pat Buchanan’s challenge to President George H. W. Bush in the 1992 Republican primary. He also was a media adviser to John Wayne Bobbitt, the Virginia man whose wife cut off his penis with a kitchen knife in 1993. And he joined with Jack Abramoff, a Washington lobbyist later imprisoned for corruption, in producing an anti-communist action movie.