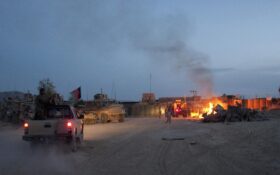 The House on Wednesday approved a significant expansion of health care and disability benefits for millions of veterans who were exposed to toxic burn pits while serving in Iraq and Afghanistan.

The 342-88 vote all but assures the measure will soon go to President Joe Biden to be signed into law. The Senate will have to vote again because of a technical fix the House made to the bill, but the essence of the bill is the same as the one senators overwhelmingly passed last month.

The bill contains two major components. First, it extends the grace period by which military veterans serving near burn pits can get medical care through the Department of Veterans Affairs. Their eligibility for VA care will double from five years after their discharge to 10 years.

Second, the legislation directs the VA to presume that certain respiratory illnesses and cancers were related to burn pit exposure, allowing veterans to obtain disability payments to compensate for their injury without having to prove the illness was a result of their service. Currently, more than 70% of disability claims related to burn pit exposure are denied by the VA due to lack of evidence, scientific data, and information from the Defense Department.

“Think of the injustice of that,” House Speaker Nancy Pelosi said of the denial rate.

“Never again should veterans be made to suffer the indignity of fighting their own government,” added Rep. Mark Takano, the Democratic chairman of the House Committee on Veterans’ Affairs.

The bill is projected to increase federal spending by about $283 billion over 10 years and does not include offsetting spending cuts or tax increases to help pay for it. An earlier version the House approved in March cost more than $320 billion over 10 years, but senators trimmed some of the costs early on by phasing in certain benefit enhancements.

Those changes brought on board more House Republicans, such as Rep. Mike Bost, the ranking Republican on the veterans panel. He said the latest version also helps ensure the VA has the staff capacity to meet the additional demand it will be facing.

“It reflects bipartisan negotiations and input from VA, who is ultimately responsible for putting it into practice,” Bost said.

Still, many Republicans were not on board. All 88 no votes came from Republican lawmakers. Rep. Chip Roy, R-Texas, said the concerns about toxic exposure are real and need to be addressed, but “we have to address the issue in this body of spending money we don’t have.”

“We’re undermining the sacrifice of the very veterans that we say that we are helping with this measure, by not doing it fiscally responsible,” Roy said.

The legislation would also benefit many Vietnam War-era veterans by including high blood pressure on the list of conditions presumed to have been caused by exposure to Agent Orange. And it would extend Agent Orange presumptions to veterans who served in Thailand, Cambodia, Laos, Guam and American Samoa.