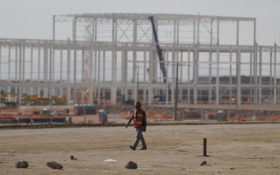 A Florida construction worker is recovering after being buried alive.

An unidentified construction worker fell into a 30-foot  hole and was completely covered by dirt Thursday. Gainesville Fire Rescuers used shovels and hands to dig through the dirt until they found the worker’s head. Rescuers said he was breathing but not conscious.

He regained consciousness as they uncovered him and crews used a harness and ropes to lift him out. The Gainesville Sun reports the rescue took about 20 minutes.

No details were given as to how the man fell into the hole.