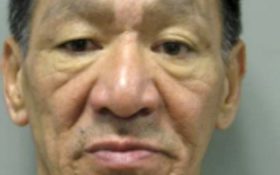 Police in Maryland say a burglary suspect jumped over a 12-foot (4-meter) wall twice during a chase before being captured.

An officer with a K-9 tracked down Anderson. Police say he then “jumped over an approximately 12-foot wall,” but jumped back over when he encountered more officers on the other side.

The newspaper reports the world high-jump record is just over 8-feet (2.4-meters) so it’s unlikely Anderson cleared the wall in a single bound. It’s unclear how it was climbed.