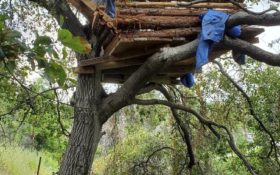 Police pursuing a burglary suspect in a Southern California suburb found him living in an elaborate treehouse hidden on a hillside.

The Pomona Police Department said a tipster reported Tuesday night that someone was living in the treehouse. Officers in a helicopter used heat-sensing equipment to locate 56-year-old Mark Duda in what police described as “a very well built and modern” tree house.

Duda climbed down the tree and was arrested on suspicion of burglarizing a house last month. Lt. Marcus Perez said he believes Duda built the treehouse and was living in it after being released on parole for a previous burglary case.

Police said the treehouse was equipped with a fire pit, barbecue and lighting. It also looked out to the mountains in the distance.