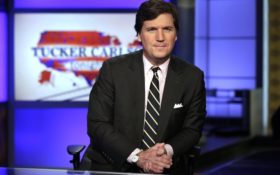 Stormy Daniels’ lawyer Michael Avenatti has big ambitions. As an outspoken critics of President Donald Trump, Avenatti has made it clear he wants to be in the spotlight.

Fox News’ Tucker Carlson gave him all the spotlight he wanted on Thursday — and it was more than Avenatti could handle.

“Why are you rich, and your client is working in seedy strip clubs?” Carlson asked.

“Do you have any idea how much money I’ve earned from this? You have no idea,” Avenatti replied.

“You’re on every cable news talk show. Heck, you’re running for president now! I do know you haven’t paid your taxes, though,” Carlson replied.

“That’s absolutely ridiculous. You don’t know your facts, Tucker. How do you have a show, and you’re this ignorant?” In January, Avenatti’s former firm — Eagan Avenatti LLP — had to pay approximately $2.4 million in unpaid taxes and penalties as part of a resolution of a bankruptcy case.

“Here’s what I know for a fact: Your client is not thriving,” Carlson said to a visibly upset Avenatti. “For you to look me in the eye and say ‘She wants to perform in strip clubs with people throwing things at her’ is insulting to her. People don’t do that unless they have no choice. Or, she just likes it, is that what you’re saying?”

“Tucker, now you’re the defender of my client?” Avenatti replied. “You don’t know anything about my client.”

“You don’t know anything about my client,” Avenatti said.

“I know she’s working in a strip club in Richmond,” Tucker said.

“I’ve done a remarkable job for my client and she’ll be the first one to tell you that,” Avenatti claimed.

“And had you listened to any of her interviews, or seen any of her comments, you would know exactly what she thinks of me. I am not exploiting my client. I’m representing my client to the absolute…”

Carlson interrupted. “So, when she wants to get your legal advice, does she have to pretend to be a [show booking agent] from CNN to get through to you?”

“What’s disgusting is that you’re thriving, and she is not,” Carlson replied.

“I’m not making fun… hold on, slow down,” Carlson said. Avenatti demanded to know the last time he watched pornography.

A stunned Avenatti stumbled for his own comeback, but was lost for words. Carlson wrapped up the explosive exchange.

“I will say this, sincerely. I’ve never attacked Stormy Daniels,” Carlson said. “I think you are exploiting her, which I’ve said five times. And you haven’t answered the question, which is: ‘Why is it that her life has stalled? Your life… you’re planning a new career as a politician, and like so many lawyers you are taking advantage of her. You pose as some feminist hero because you are shameless and the other channels let you get away with it. But you’re an exploiter of women, and you should be ashamed of it.”

You can watch the heated exchange here.