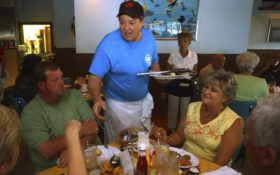 Bubba Hiers, who left behind landscaping to help his celebrity sister Paula Deen grow her Savannah restaurant business as she rose to fame, has died at age 65.

“Bubba was the greatest brother who was loved by so many people,” Deen said in an emailed statement Monday. “We will miss him dearly.”

Named Earl Wayne Hiers Jr. after his father, and nicknamed “Bubba” since childhood, Hiers grew up with Deen in Albany in southwest Georgia. By 2000, Deen was a single mom who had moved across the state to Savannah. Her first business selling bag lunches had been so successful that she opened a small restaurant, The Lady & Sons, in the city’s downtown historic district.

“I dreamed that someday my boys and I would find a way to drag Bubba into the business with us,” Deen wrote in the foreward to Hiers’ 2007 cookbook, “Uncle Bubba’s Savannah Seafood.”

Hiers sold his landscaping business in Albany and joined his sister in Savannah not long before the Food Network launched the show “Paula’s Home Cooking” in 2002, soon making Deen famous for deep-fried cuisine. Deen wrote that Hiers helped her buy and renovate a larger building that expanded her restaurant from 90 seats to a multifloor eatery serving up to 2,000 meals each day.

Deen tried to help Hiers find his own space in the limelight. With her financial backing, he opened Uncle Bubba’s Oyster House in 2004 overlooking the scenic marshes east of Savannah. A few years later, Hiers published his cookbook, which also featured his sister’s name on the cover.

“Without Paula’s support, sensible advice, and unconditional love, I’d probably be a lost soul,” Hiers wrote in the cookbook’s introduction.

Both Hiers and Deen paid a heavy toll after a former Uncle Bubba’s manager filed a lawsuit that accused Hiers of sexual harassment. A transcript of Deen’s legal deposition in the case became public in 2013, and included her admission to having used racial slurs in the past.

Fallout from Deen’s widely publicized deposition caused the Food Network to cancel her show in June 2013. Uncle Bubba’s closed abruptly the following year, after the lawsuit was settled out of court.

After that “he kind of dropped off the map,” said Polly Powers Stramm, a Savannah author who co-wrote Hiers’ cookbook.

“He was pretty talented in his own right. He could cook and all that, hunt and fish,” Stramm said. “He was always very much a gentleman to me.”