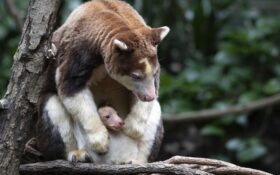 A baby tree kangaroo that’s just poking its nose out of its mother’s pouch is the first of its species born at the Bronx Zoo since 2008, zoo officials announced Friday.

The birth of the Matschie’s tree kangaroo joey “is an exciting birth for the Bronx Zoo and a unique opportunity for people to observe one of nature’s most intriguing evolutionary adaptations,” zoo director Jim Breheny said in a news release.

The Matschie’s tree kangaroo is native to Papua New Guinea and is listed as endangered by the International Union for Conservation of Nature. It is arboreal and lives in mountain rainforests.

The species is much smaller than Australia’s well-known red kangaroo. An adult male Matschie’s tree kangaroo weighs between 20 and 25 lb (9–11 kg). The joey is about the size of a human thumbnail at birth, zoo officials said.

The tiny joey crawls through the mother’s fur to enter her pouch and emerges after about seven months.

“At this stage of development, the joey will spend a lot of time in his mom’s pouch with just its head sticking out,” Breheny said. “As it matures it will begin to explore its environment and start spending short periods of time outside the pouch.”

Conservationists believe that fewer than 2,500 Matschie’s tree kangaroos remain in the wild. They are threatened by habitat destruction, hunting and other human activities.