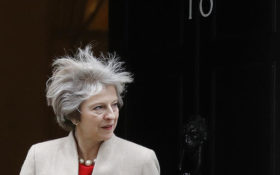 Britain will make a clean break from the European Union and not seek to remain “half-in, half-out,” Prime Minister Theresa May will say Tuesday, disappointing businesses and voters who want the country to stay in the bloc’s single market.

In her most detailed speech on the U.K.’s exit strategy, May will promise to forge “a new and equal partnership” with the EU.

May’s speech appears to rule out the sort of close ties adopted by non-EU members Switzerland or Norway. It’s likely to be another shock for the beleaguered pound, which hit a three-month low below $1.20 Monday amid hints that May would signal an economy-roiling “hard Brexit.”

Sterling has lost about a fifth of its value since Britain voted in June to leave the EU.

May has said she rejects both the “hard Brexit” label and its opposite, a compromise “soft Brexit” — but wants a new relationship in the interests of both Britain and the EU.

“We want to buy your goods, sell you ours, trade with you as freely as possible, and work with one another to make sure we are all safer, more secure and more prosperous through continued friendship,” she’ll say.

In a bid to alleviate fears that Brexit will mean a more insular Britain, May will say she wants the country to be “stronger, fairer, more united and more outward-looking than ever before.”

In an attempt to symbolize the U.K.’s outward-facing aspirations, May will deliver her speech to an audience of British civil servants and international diplomats at London’s Lancaster House, a Georgian mansion that has hosted international summits over the decades.

May’s speech signals that Britain will quit the EU’s single market in goods and services in order to gain control over immigration — a key issue for many voters who backed Brexit. EU leaders say Britain can’t stay in the single market without allowing free movement of people from the bloc.

The prospect of losing single-market access alarms many in Britain’s huge financial services sector, which relies on an ability to do business seamlessly across the 28-nation bloc.

It also worries the many foreign firms that use London not only as a financial hub but as an entry point into the EU.

“We now have to assume May will prioritize immigration controls, and the price to pay will be to exit the single market,” said Neil Wilson, senior market analyst at ETX Capital. “That could send the pound a lot lower still, perhaps towards $1.10 in the coming weeks.”

The pound recovered to above $1.20 Monday after U.S. President-elect Donald Trump’s comment in an interview with The Times of London that a U.S.-U.K. trade deal could be done “very quickly” once he takes office this week.

May says she will invoke Article 50 of the EU’s key treat by March 31, to formally begin a two-year process of negotiating Britain’s departure.

But she has until now refused to reveal details about the government’s goals or negotiating strategy, arguing that to do so would weaken Britain’s hand.

Some details have now begun to emerge.

British Treasury chief Philip Hammond fueled speculation that Britain will play hardball in Brexit negotiations, telling the German newspaper Welt am Sonntag that the U.K. hoped to retain single-market access but would be willing to “change our economic model to regain competitiveness” if that was cut off.

May spokeswoman Helen Bower said the prime minister and Hammond both want Britain “to remain in the mainstream of a recognizable European-style taxation system.”

“But if we are forced to do something different because we can’t get the right deal, then we stand ready to do so,” she said.

Tim Bale, professor of politics at Queen Mary, University of London, said that May was well advised to use her speech to bring clarity about Britain’s intentions — even if many people won’t like the message.

“I think ruling out membership of the single market … is in some ways the clarity people are looking for,” Bale said. “Yet were she to do that, it would be a massive blow to many sectors of the economy. But if that’s really what she’s going to do, and it’s not simply a negotiating stance on her part, it might be better to do it sooner rather than later.”

May will also use her speech to appeal for reconciliation between the 48 percent of British voters who wanted to stay in the EU and the pro-Brexit 52 percent. But the gap between “remainers” and “leavers” appears as wide as ever.

In London’s financial district, the City, many worry about the future of their global businesses and international workforce once Britain is out of the EU fold.

“I feel like we should be heading towards more world cooperation generally speaking and this feels like a very retrograde step,” recruitment firm employee Christopher Devine said.

A few miles to the east in working-class Romford, where a large majority voted to leave, many say Brexit can’t come soon enough.

“I think it could happen a little bit quicker,” said Tony Geary, who sells clothes in Romford market. “Theresa May now needs to sort of get her finger on the button and make sure everything is in place so by the end of this financial year she is in a position to make things happen.”